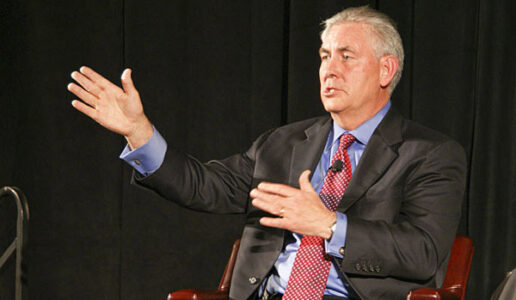 Gallagher was interviewed for a February 2, 2018 article in BBC entitled “Latin America Does Not Need a New Imperial Power”: The Harsh Warning From the United States About the Growing Influence of China in the Region.”

Kevin Gallagher, Director of the Global Development Policy Center at Boston University and an expert on the China-Latin America relationship, believes that Tillerson is upset that the region now has new options.

“He has the audacity to say such things (about China) while his administration builds tariff and concrete walls between the U.S. and Latin America, after the Chinese offered financing and technical assistance for infrastructure and industrialization, things the region asked the U.S. for decades, ” adds Gallagher in statements to BBC World.

In the opinion [Gallagher], author of the book “The China Triangle”, Latin American countries must manage their relationship with Beijing as well as with Washington, of which they were “excessively dependent”.

“Neither China nor the U.S. can make the region prosperous,” he says. “The region needs its own plan to partner with its old and new allies, without which it could accentuate its external vulnerabilities with both China and the U.S.”

Gallagher served on the U.S. Department of State’s Investment Subcommittee of the Advisory Committee on International Economic Policy and the International Investment Division of the United Nations Conference on Trade and Development.  He has served as a visiting or adjunct professor at the Paul Nitze School for Advanced International Studies at Johns Hopkins University, the Fletcher School of Law and Diplomacy, Tufts University; El Colegio de Mexico in Mexico; Tsinghua University in China; and the Center for State and Society in Argentina. You can follow him on Twitter @KevinPGallagher.