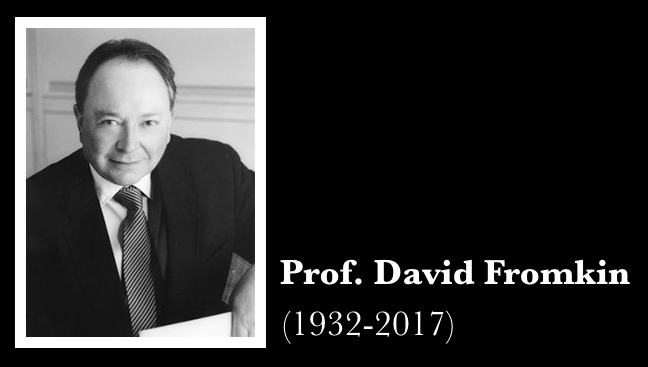 Pardee School Professor Emeritus David Fromkin has died. Since retirement, he had moved permanently to New York, where he died on June 11, 2017. He was 84.

Prof. David Fromkin – prolific author, noted lawyer, respected historian, and beloved teacher and colleague – had a long career as a professor at Boston University’s Department of International Relations (now part of the BU Pardee School). He came to Boston University in 1994 as the Chair of the then department of International Relations, a position he held till 1997. During this period he was also the Director of the Center for International Relations. He also served on the faculty at the BU Department of History and the BU School of Law.  Between 2000 and 2007, he served as the founding director of the Frederick S. Pardee Center for the Study of Longer-Range Future. Prof. Fromkin retired in 2013 and had been a BU Pardee School Professor Emeritus since then. 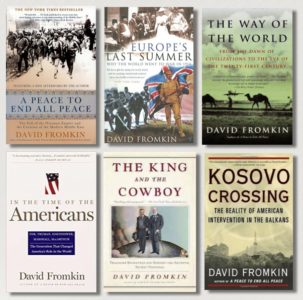 After a varied career in law, business, and politics, he turned to writing works of history and studies of world politics. His best-known work was his 1989 book, A Peace to End All Peace: Creating the Modern Middle East 1914-1922 (1989). The New Yorker review described the book as “one of the great narrative dramas of he twentieth century,” while Kirkus rightly pointed out that it would be the “benchmark for all future books on the Middle East.” It was a national bestseller, was chosen by the editors of the New York Times Book Review as one of the dozen best books of the year, and was shortlisted for the Pulitzer Prize.

The New York Times published a June 15, 2017 obituary for Fromkin that also reviewed his extensive scholarly work and contributions to the field of International Relations.

BU Today published a remembrance of Fromkin on June 19, 2017 that discussed his role as the founding director of the Frederick S. Pardee Center for the Study of the Longer-Range Future.

His shorter pieces appeared in Foreign Affairs, the New York Times, and other publications. His books included: The Question of Government: An Inquiry into the Breakdown of Modern Political Systems (1975), The Independence of Nations (1981), In the Time of the Americans: FDR, Truman, Eisenhower, Marshall, MacArthur, The Generation That Changed America’s Role in the World (1995), The Way of the World: From the Dawn of Civilizations to the Eve of the Twenty-first Century (2000), Europe’s Last Summer: Who Started the Great War in 1914? (2004). His most recent book, published in 2007, was The King and the Cowboy: Theodore Roosevelt and Edward the Seventh, Secret Partners.

Born in Milwaukee, WI, David Fromkin has spent most of his professional life as a practitioner attorney and a private investor. He served as the head of foreign policy for Hubert Humphrey in the 1972 presidential primary campaign. Additionally, he served for three years as a First Lieutenant in the Judge Advocate General’s Corps, U.S. Army, stationed in Verdun, France, where he was a trial observer in French courts pursuant to the NATO Status of Forces Agreement. As prosecutor and defense counsel, he fought more than one hundred contested courts martial. He was also an amateur archeologist and helped support excavations at Knidos in Turkey, and at Hierakonpolis in Egypt. A wine connoisseur, he was part owner of restaurants and wine bars in Paris, where he spent most summers.