Goldstein Speaks on Centennial of U.S. Entry Into WWI 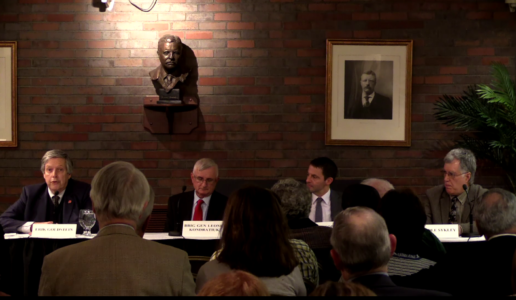 Erik Goldstein, Professor of International Relations and History at the Frederick S. Pardee School of Global Studies at Boston University, was part of a recent panel marking the 100-year anniversary of the United States entry into World War I.

The panel was part of “Fighting Doughboys: Massachusetts Called to Arms in WWI,” hosted by the Howard Gotlieb Archival Research Center on April 6, 2017.

The event opened with Stephen Taber, Chair of the Massachusetts Centennial Commission, to commemorate the centennial with a reading the Declaration of War. The event also featured remarks from Valery Freland, Consul General of France in Boston, and James Peyser, Massachusetts Secretary of Education.

Goldstein’s remarks focused on the global context of the conflict the United States found itself engaged in, and the implications of the engagement.