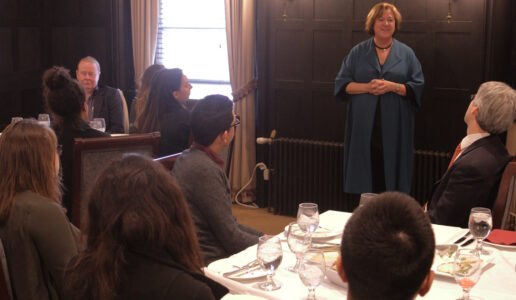 Amb. Leonard’s talk, entitled “A Foreign Service Career: From BU to the AU,” focused on her own career path ‎and Foreign Service careers. Amb. Leonard was appointed by President Obama as the Representative of the United States of America to the African Union, with the rank and status of Ambassador Extraordinary and Plenipotentiary, on July 5, 2016.

Amb. Leonard was appointed by President Obama as the Representative of the United States of America to the African Union, with the rank and status of Ambassador Extraordinary and Plenipotentiary, on July 5, 2016. She discusses her experience going back to school for a Master’s of Security and Strategic studies at the U.S. Naval War College in 2004.

“It was a really great opportunity where some civilian government employees and some military people come together to think about the ways in which we all work together to devise and implement national security decisions and outcomes,” Amb. Leonard said.

Amb. Leonard urged the Dean’s Ambassadors to consider careers in the Foreign Service, and provided advice on how to navigate the intensive application process for Foreign Services careers.

“It is a fabulous career, and there is this perception that is also a reality that very few people are accepted to the foreign service,” Amb. Leonard said. “Some people are. It says you are in an elite group like this that says you’re above the curve. After you pass the foreign service exam, the written part of the exam, that basically puts you in a pool of certified very smart people,” Amb. Leonard said. “That’s the pool we want to recruit from. You’re ability to make yourself competitive and attractive in the remainder of that process is something that you can kind of control.”

Following her lunch and her talk with the Dean’s Ambassadors, Amb. Leonard stopped by the Pardee School BU Giving Day ice cream stand to further mingle with faculty and students.

Dean’s Ambassadors are outstanding student citizens and leaders from the Pardee School’s graduate and undergraduate academic programs. They are passionate and knowledgeable about the Pardee School and about Boston University. Following Amb. Leonard’s talk, the Dean’s Ambassadors had the opportunity to ask her about her career in the Foreign Service as well as for career advice.