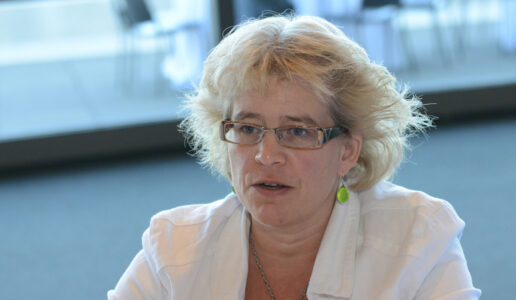 Betty Anderson, Director of the Institute for the Study of Muslim Societies and Civilizations at the Frederick S. Pardee School of Global Studies at Boston University, spoke at a conference hosted by the Center for Middle Eastern Studies at Harvard University on March 31, 2017.

The conference, entitled “The Naksa Fifty Years Later:  New Sources, Questions, and Approaches to the ’67 War,” which explored new approaches to understand and rethink a pivotal and transformative moment in the history of the modern Middle East. The conference aimed to further the search for new sources that can shed light on the war and its long term repercussions for Arab societies.

Anderson spoke as part of a panel entitled “Student Mobilization after 1967,” which was chaired by  Roger Owen, A. J. Meyer Professor of Middle East History at Harvard University.

Dr. Anderson is the author of Nationalist Voices in Jordan:  The Street and the State (Austin, 2005), The American University of Beirut:  Arab Nationalism and Liberal Education (Austin, 2011), and A History of the Modern Middle East:  Rulers, Rebels, and Rogues (Stanford, 2016).. At Boston University, she is Director of the Institute for the Study of Muslim Societies and Civilizations, as well as the Institute’s advisor to the two Muslim Studies Minors.