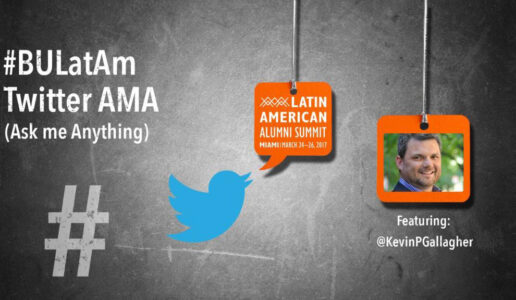 The Latin American Summit, presented in partnership with the Pardee School, will feature world-class faculty and accomplished alumni of Boston University, who will discuss such issues as global and Latin American health, smart cities, economics and investment and media. Both Gallagher and Dean Adil Najam will speak at the conference.

Questions posed to Gallagher during the AMA included what initially sparked his interest in Latin America, how slower growth in Latin America will affect the United States economy and what his favorite food from the region is:

You can also view a full account of the AMA here.
Dr. Kevin P. Gallagher is a professor of global development policy at Boston University (BU), where he co-directs the Global Economic Governance Initiative (GEGI).  GEGI’s mission is to advance policy relevant research on governance for financial stability, human development, and the environment on a global scale. Learn more about him here.