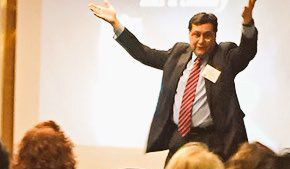 Adil Najam, Dean of the Frederick S. Pardee School of Global Studies at Boston University, met BU alumni, including those of the Pardee School, in an alumni meet-up held in New York, on February 24, 2017. The discussion and reception were organized by the Boston University Alumni Association.

Najam introduced BU’s newest school to the alumni, most of whom had graduated from the university well before 2014, when the Pardee School was created. A brief introductory video on the Pardee School was played and Najam talked about the excitement across the university about the new opportunities and possibilities that have been generated with the creation of the school.

Najam then presented a lecture and led an interactive discussion on his own research on global climate change policy. The title of his talk was “Does Climate Have A Future?” and he focused particularly on how the Paris Climate Agreement and the recent political changes in the United Kingdom as well as the United States might affect the future course of climate change policy.

Najam said he believes that the recent change of presidential administrations in the United States could have less of an impact on climate change than has been widely discussed, as many of the strides made against climate change have been at the state and local level. He argued that while these changes are profound, the public momentum and scientific consensus for climate change is now so strong that the tide can be slowed, but not reversed.

Adil Najam is an award-winning professor, distinguished author, and member of the UN Committee on Development (CDP). He was a co-author for the Third and Fourth Assessments of the Intergovernmental Panel on Climate Change (IPCC); work for which the scientific panel was awarded the 2007 Nobel Peace Prize for advancing the public understanding of climate change science. He is the inaugural dean of the Pardee School of Global Studies at Boston University. Earlier he served as the Vice Chancellor of the Lahore University of Management Sciences in Lahore, Pakistan. Learn more about him here.