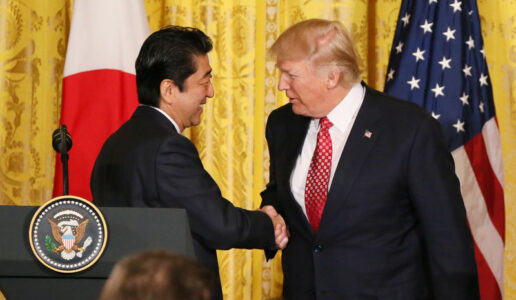 William Grimes, Associate Dean of the Frederick S. Pardee School of Global Studies at Boston University, was interviewed on the recent meeting between United States President Donald Trump and Japanese Prime Minister Shinzo Abe, and what was at stake at the meeting.

Grimes was interviewed for for a February 8, 2017 segment on Knowledge@Wharton, a daily, call-in business interview program, broadcasting live from the University of Pennsylvania Wharton School.

Trump hosted Abe at the White House where he reaffirmed U.S. commitment to the defense of Japan, while asking that Japan contribute more to the military alliance. Both leaders highlighted the  and Chinese expansion in the

Grimes was interviewed alongside Richard Dasher, director of the US-Asia Technology Management Center at Stanford University.