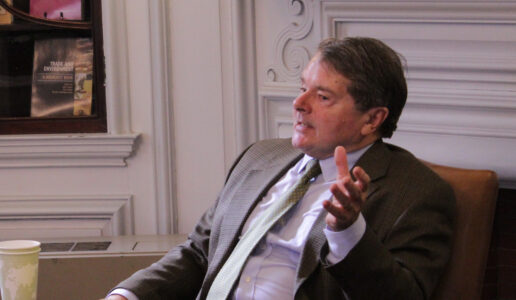 Amb. Paul Webster Hare, Senior Lecturer at the Frederick S. Pardee School of Global Studies at Boston University, gave a talk at Endicott College on February 23, 2017 on the future of relations between the United States and Cuba.

Amb. Hare, the the British ambassador to Cuba from 2001 to 2004, spoke as part of Endicott’s Speaker Series.

He discussed the outlook for Cuba over the next decade including whether there be a transition away from the Castro regime. Amb. Hare also examined whether President Obama’s efforts to normalize relations could potentially be reversed.

Hare was the British ambassador to Cuba from 2001-04. He worked for 5 years in the private sector, in law and investment banking, before serving for 30 years in the British Diplomatic Service. Hare  served overseas in Portugal, New York, at the UK Representation at the EU in Brussels, and in Venezuela as Deputy Head of Mission. He has written two policy briefs for Brookings: “The Odd Couple; The EU and Cuba 1996-2008,” and  “US Public Diplomacy for Cuba: Why It’s Needed and How to Do It.”