Goldstein in VOA on Presidential Transition and Diplomacy 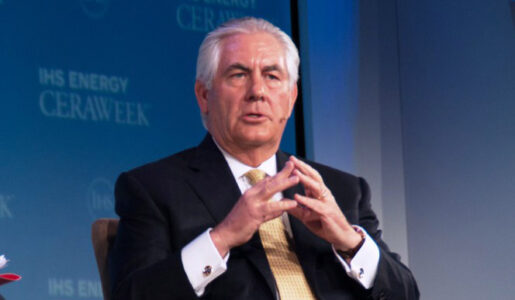 Erik Goldstein, Professor of International Relations and History at the Frederick S. Pardee School of Global Studies at Boston University, was recently interviewed on the transition of presidential administrations and the possibility of  diplomatic realignments as President Elect Donald Trump prepares for his Inauguration on January 20, 2017.

Goldstein was interviewed for a January 19, 2017 article in VOA entitled “Career Diplomat Becomes Acting Secretary of State with Trump Inauguration.”

Moments of transition are potential moments of vulnerability. “That’s one reason why, normally, every effort is made to have a quick and clear changeover of senior officials, said Professor Erik Goldstein, a scholar of diplomacy at Boston University. “But it should be recalled that there remains in place a highly trained and experienced foreign service able to deal with all emergencies. The world is also now used to this four-to-eight-year cycle.”

The concern extends to the other side of the Atlantic, according to Boston University’s Goldstein, who told VOA that Trump’s comments are “having shockwaves across Europe, especially those areas only liberated from Soviet control 25 years ago.”

Trump has been criticized by both Republicans and Democrats for a soft stance toward Russia and its president, Vladimir Putin.

Goldstein, founder of the journal Diplomacy and Statecraft, acknowledged the possibility of significant diplomatic realignments in the near future because of Washington and the uncertainty created by Britain, the other stabilizer within the alliance, leaving the European Union. He expressed hope that “a clear signal from the new [Trump] administration could quickly restore that sense of equilibrium.”