BUCSA: Agawa on Japan’s Foreign Policy in the Age of Walls 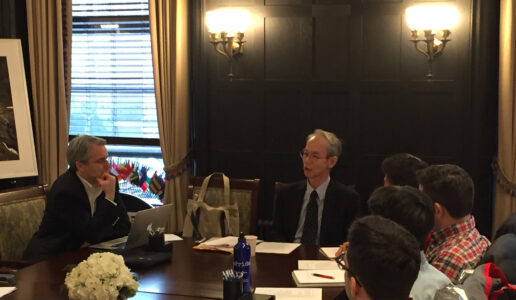 The Center for the Study of Asia (BUCSA), an affiliated regional studies center of the Frederick S. Pardee School of Global Studies at Boston University, hosted Naoyuki Agawa, Distinguished Professor of Law at Doshisha University on December 8, 2016 for a discussion on the future of Japanese foreign and security policies.

The lecture, entitled “Japan in The Age of Walls: Its Current and Future Foreign and Security Policies in East Asia and Beyond,” was made possible by Japan’s Consul General in Boston, Koichiro Doichiro.

Agawa discussed contemporary walls, both literal and figurative, including the campaign promise made by United States President Elect Donald Trump to build a wall along the Mexican border as well as the vote by the United Kingdom to leave the European Union.

“British people indicated that we will no longer be a part of the continent,” Agawa said. “This is a very old, sort of, British sense that the continent is very different from the country, but they have been part of the EU and now they are saying that they are not going to be. This is one kind of wall that we are talking about.”

“Mr. Putin’s Russia seems to be re-erecting a new barrier sort of reminiscent of the Iron Curtain from the Cold War era,” Agawa said. “Mr. Xi Jinping, while continuing to keep the Chinese economic market open and robust, I think has erected an even higher wall to prevent democratic ideas from coming in. In addition, he seems to be building a new sort of wall in the South China Sea.”

Agawa also discussed the future of foreign relations between the United States and Japan in light of comments made by President-Elect Donald Trump that the military alliance between the two countries has become one-sided.

“Mr. Trump has said that the United States might withdraw armed forces from Japan,” Agawa said. “This is the first time that something got out of the box and people are quietly beginning to think what if this is not the unchangeable premise of the alliance.”