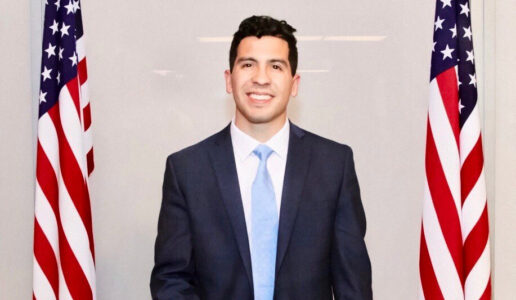 As a senior at the Fredrick S. Pardee School of Global Studies at Boston University Andres Vargas (Pardee ’15) didn’t plan on running for office immediately after graduation, but he did feel strongly about pursuing a career in public service. His time as an intern at the White House under President Barack Obama helped change that, and set Vargas on a path that would lead him to become the first Latino City Councilor for the city of Haverhill, Massachusetts at the age of 22.

“I was fortunate enough to be accepted as a White House intern,” Vargas said. “While there, President Obama came to speak to the intern class and said something that stuck with me. He said ‘If you want to live a fulfilling life, don’t think about who you want to be, think about what you want to do,’”

Vargas, who had planned on looking for a permanent job in Washington D.C. following his White House internship, said President Obama’s words helped him realize that returning to Haverhill to address some of the problems facing his hometown was more important to him.

“I wanted to address the fact that our teachers were payed the lowest salary in the region. I wanted to chip away at the opioid crisis. And, I thought we might have the opportunity to empower residents and make some history along the way by becoming the city’s first Latino elected official,” Vargas said. “This was more about the what I wanted to do, as the President suggested.”

Vargas said that courses he took during his time at the Pardee School, specifically in economics, helped prepare him for his duties as a Haverhill City Councilor. He also pointed to several clubs and student groups he was involved in at Boston University, including Student Government, as crucial preparation toward becoming an elected official.

“If you asked me what my least favorite courses were during the first half undergrad, I would point to micro and macroeconomics,” Vargas said. “However, I have to admit, they have been extremely useful as I deliberate over the city’s budget and analyze key economic indicators. Professor David Scott Palmer’s courses also helped me strengthen my writing and ability to effectively back claims, which is key when you’re looking to build support amongst the public and fellow councilors.”

In November, Vargas was honored by El Mundo Boston as one of the Latino 30 Under 30 most influential young Latinos in Boston along with other young leaders from fields including business, sports, community service and fine arts.

“I felt honored to be a part of a list of so many talented and accomplished Latinos,” Vargas said. “It brought me great joy to hear about the amazing projects each awardee was working on. You could argue that the Latino community, among other minorities, are currently under attack, so a night like this — where we celebrated the positive impact young Latinos are having — was truly special and the timing couldn’t have been better.”

Vargas has succinct advice for current Pardee School students interested in pursuing a career in politics or other types of public service — jump right in.

“Don’t be afraid to jump!” Vargas said. “There will never be a perfect time to run for office. The public sector may not pay you as well as the private sector, but I can assure you that the public sector needs you more. Go where you are needed. Jump!”