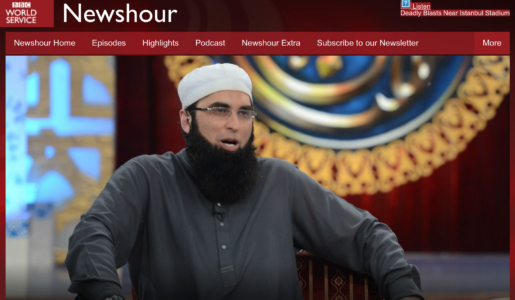 BBC Radio’s popular news show NewsHour interviewed Prof. Adil Najam, Dean of the Frederick S. Pardee School of Global Studies at Boston University, on the sudden death of Pakistan’s celebrity singer-turned-preacher Junaid Jamshed in a plane crash. The former rock star who later became a religious evangelist had been a school friend of Dr. Najam in his early music days.

The BBC report can be heard by clicking on the picture above, or here.

Najam spoke about the importance of his emerging as a young guitar-stumming, motorcycle riding, heart-throb and celebrity performer during, and in many ways in defiance of, Gen. Zia-ul-Haq’s religiously straight-laced Pakistan. “He was really at a cutting-edge at a defining moment in terms of music in Pakistan but also in terms of what it meant to be young,” said Najam.

Najam also spoke about his later and sudden transformation into a religious preacher. This, he said, was a shock and surprise to many. However, Junaid Jamshed brought the same freshness and celebrity to his religious preaching that he had to his music.

Asked by host James Coomarasamy how he would remember Junaid Jamshed, Najam said that he would remember him as a friend, as a communicator and ultimately as a leader for many and in many different areas. Hear full interview here.

Adil Najam is the Dean of the Pardee School and a Professor of International Relations. He was the former Vice Chancellor of the Lahore University of Management Sciences (LUMS) in Pakistan. Read more about him here.