Hare in the Media on Fidel Castro 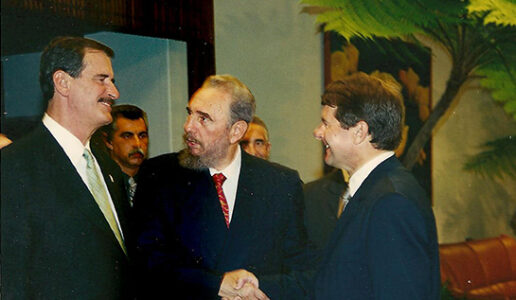 Amb. Paul Hare, Senior Lecturer at Frederick S. Pardee School of Global Studies at Boston University, was interviewed by several media outlets regarding the death of Fidel Castro and what his death could mean Cuban reform moving forward. Hare was a British diplomat for 30 years and the British ambassador to Cuba from 2001 through 2004.

Hare was interviewed on December 1, 2016 by WOSU, NPR’s Ohio station, for a segment on the future of relations between the United States and Cuba. You can listen to the entire interview below:

Hare published a November 29, 2016 Op-Ed in The Conversation entitled “Questions I Never Got to Ask Fidel Castro.”

You came to power in 1959 as a successful revolutionary guerrilla fighter and as a wildly popular leader. You projected youth and openness. You ousted the corrupt and brutal Fulgencio Batista, who had ruled Cuba unconstitutionally, and you welcomed contact with the foreign media. In your first months in power, you launched a moderate program of land reform, literacy and popular participation. You even appointed some officials who were not direct followers of your movement.

But, almost immediately, you also punished a loyal follower, Huber Matos, by sending him to prison for over 20 years. Matos did not like your movement toward communism, but he never threatened you. Another contributor to your victory was Cleveland native William Alexander Morgan, the “Yanqui comandante.” You liked him, but about a year after you took power, he was executed. Was this purely vindictive?

On November 28, 2016, Hare appeared on WGBH’s Greater Boston to discuss Fidel Castro’s death and what it means for Cuba moving forward. You can watch the entire interview below:

For Cubans, Fidel was how they learnt the alphabet — F for Fidel, Y for Yanqui. He was how they thought, how they saw the outside world and how they earned their living. His government made them dependent because they all worked for it. It was Fidel or nothing. Socialism or Death. He never suggested he would ask the people what they wanted. He told them and they believed. Now it is not clear what the ‘or’ is for Cuba.

Hare was also interviewed for a segment on BBC Radio 5 Live  which you can listen to in its entirety here.

Paul Hare was the UK’s ambassador to Cuba from 2001-2004 and is now an international relations lecturer at Boston University. He described the leader as “a good reader of human nature” which “helped him consolidate power”.

But he warned of uncertainty in the future.

“For many Cubans its almost impossible to conceive of a world, a Cuba, without Fidel. So change will have to be carefully managed,” he said.

Hare was quoted in a November 27, 2016 article in The Japan Times  entitled “Raul Castro, Stepping From Fidel’s Towering Shadow.”

Paul Webster Hare, who teaches international relations at Boston University, said Castro was happy to have new U.S. tourism dollars but unbending on the issue of allowing democratic freedoms.

“The blocks will be imposed on political grounds on the Cuban side. That would change the whole narrative of the Cuban Revolution, which Raul wants to preserve,” said Hare, a former British ambassador to Cuba.

“Raul’s main concern is not to endorse inequality like the Chinese have,” he added. “He knows that the revolution would not survive long.”

Hare was also quoted in a November 27, 2016 article in Reuters entitled “Castro’s Death Could Change Cuba Reform Dynamic, Much Depends on Trump.”

“President-elect Trump may simplistically see a chance to restart an adversarial relationship … to prove he is the strong man he said he is,” said Paul Hare, a former British ambassador to Cuba.