Aftandilian in The Arab Weekly on U.S.-Egypt Relations 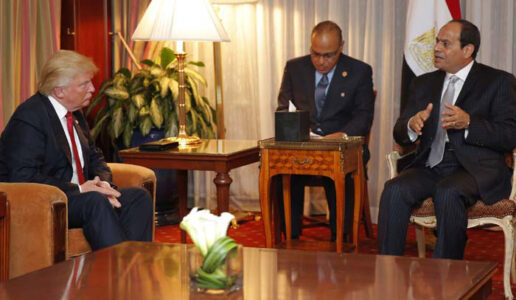 Gregory Aftandilian, Lecturer at the Frederick S. Pardee School of Global Studies at Boston University, published a recent Op-Ed on the effect that Donald Trump’s victory in the 2016 United States presidential election could have on relations between the U.S. and Egypt.

Tellingly, reportedly the first foreign leader to congratulate US Presi­dent-elect Donald Trump was Egyptian President Abdel Fattah al-Sisi. Although the two had met only once, they seem to share a similar outlook about threats facing Egypt, the Middle East and the larger international community.

From Sisi’s perspective, Trump represents the anti-Barack Obama and the anti-Hillary Clinton. Much of the hostility towards these lead­ing Democrats stems from the time of Muslim Brotherhood leader Mu­hammad Morsi’s election as Egyp­tian president in 2012 and the af­termath of his ouster from power in 2013.

In the summer of 2012, when it appeared that Morsi had won the presidential vote, the Egyp­tian military was reluctant to an­nounce the winner; earlier, the ruling military council had issued a decree stripping the presidency of real power. Clinton, then US sec­retary of State, urged the Egyptian military to respect the outcome of the election and publicly declared that the military should return to a “purely national security role” — meaning it should go back to the barracks.

The following summer, Obama, as US president, criticised the se­vere crackdown on the Muslim Brotherhood by Sisi, then Defence minister, and the security services and two months later suspended a large portion of US military aid to Egypt.