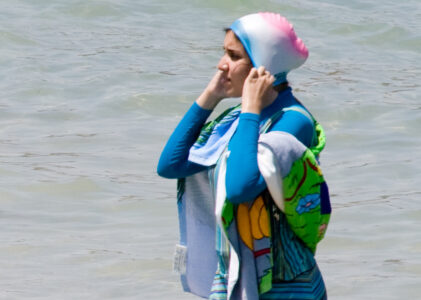 William Keylor, Professor of International Relations and History at the Frederick S. Pardee School of Global Studies at Boston University, was part of a panel on the Burkini ban in France held at the Howard Thurman Center on November 3, 2016.

The panel, entitled “The Burkini Ban: How Did We Get Here?”, was sponsored by the Association Francophone de Boston University and the Islamic Society of Boston University. Other panelists included  Associate Professor of the Practice in Middle Eastern Literatures Roberta Micallef and Professor of Anthropology Kimberly Arkin.

In late July, Cannes banned the Burkini, a type of swimsuit that covers the whole body except the face, hands and feet in accordance with Islamic traditions of modest dress, on public beaches. While a court ruled in August to overturn the ban on Burkinis, many local legislators in France vowed to ignore the ruling.