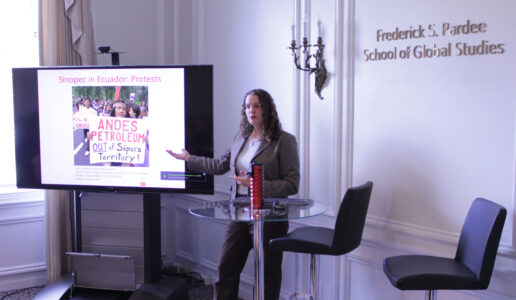 The Global Economic Governance Initiative, a research initiative at the Frederick S. Pardee School of Global Studies at Boston University, hosted a discussion with Research Fellow Rebecca Ray on seeking a path to sustainable development in Latin America.

Ray is a pre-doctoral fellow at GEGI and PhD student in economics at the University of Massachusetts Amherst whose research examines development strategies in Latin America, and the impact of international finance on domestic labor markets, living standards and environmental sustainability.

According to Ray, the so-called “China Boom,” has strengthened interest in pushing governments to lower standards throughout Latin America, and that Latin American governments and civil societies along with Chinese ministries and investors have crucial roles to play to make Chinese investment in Latin American sustainable and successful.

Ray said it will be crucial for both Latin American governments to creating and enforcing high standards for Chinese investors to follow.

“You’re not going to scare away these investors just because you’re requiring them to behave well in your countries,” Ray said. “They don’t act like Western investors that might be more skittish and run away at the mere thought of requiring a basic level of responsibility. Communicating and enforcing these standards, however, is crucial because these investors are not used to having to deal with this level of regulation.”

Ray holds an MA in International Development at the George Washington University. Prior to joining GEGI, she worked as a research associate at the Center for Economic and Policy Research. She has conducted academic fieldwork in Ecuador, Nicaragua, and Canada. You can learn more about her here.