Longman in the Media on the Last King of Rwanda 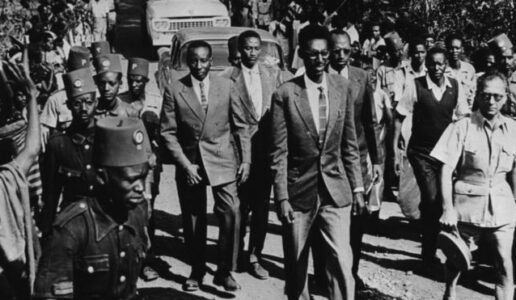 Timothy Longman, Associate Professor of International Relations and Political Science and Director of the African Studies Center at the Frederick S. Pardee School of Global Studies, was recently interviewed on the death of Rwandan King Kigeli V Ndahindurwa.

Longman was interviewed for an October 17, 2016 segment on BBC Newshour entitled “The Last King of Rwanda.”

He was someone who became King under sort of mysterious circumstances. His brother was apparently poisoned or died, we don’t really know exactly why, and [King Kigeli V] became King when he was in his younger 20’s and he only reigned for two years and then he lived in exile for almost all of his life.

He didn’t really have any wealth so he kind of lived a modest life in Nairobi for quite a while where he used to hold court every Sunday afternoon in front of a movie theater downtown, and then he moved to Washington D.C. and spent the rest of his life living modestly in the suburbs.

He was a person who was more important as a symbol than an individual because he wasn’t a really dynamic leader, but he came to symbolize a different way of doing politics in Rwanda.

You can listen to the segment here:

Longman was also quoted on the death of King Kigeli V in an October 18, 2016 article in The Washington Post entitled “Kigeli V Ndahindurwa, Rwandan King Without a Crown, Dies at 80.“

By the next year, social unrest had driven Kigeli from the country. In 1961, the Belgians removed him in response to the uprising, said Timothy Longman, director of the African Studies Center at Boston University. The monarchy was abolished, Rwanda became a republic and in 1962, it obtained independence from Belgium.

“As a symbol he was very important,” Longman said, particularly for the tens of thousands of Tutsis who had fled Rwanda during the 1960s.

Longman’s current research focuses on state -society relations in Africa, looking particularly at human rights, transitional justice, democratization, civil society, the politics of race and ethnicity, religion and politics, and women and politics. You can read more about him here.