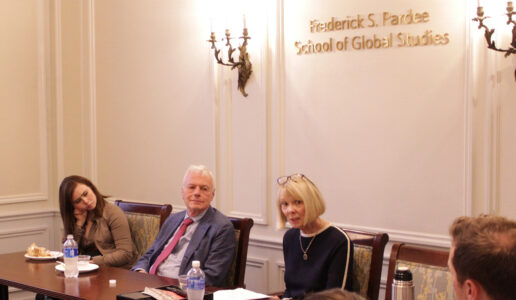 Former Central Intelligence Agency (CIA) Officer Sandra Grimes gave a talk at the Frederick S. Pardee School of Global Studies at Boston University on September 28, 2016 on her role in the investigation of Aldrich Ames, a counterintelligence officer who was convicted of spying for the Soviet Union.

Joseph Wippl, Professor of the Practice of International Relations at the Pardee School and a a former Central Intelligence Agency officer who was part of the Aldrich Ames damage assessment team, hosted Grimes.

Ames, currently serving a life sentence for committing espionage, compromised the second-largest number of CIA agents in history. In 1985, the CIA’s network of Soviet-bloc agents began disappearing at an alarming rate causing the agency to assemble a team to investigate the possibility of a mole.

Grimes was a member of the team that eventually made the breakthrough that led to Ames’ arrest in 1994. She discussed the difficulties in searching for a breach within the agency.

“We knew he would not be a stranger — he would be a friend,” Grimes said. “Somebody we had probably known for a very long time, and someone we’d run into frequently in the hallways of our headquarters building.”

Grimes published a book on the case, Circle of Treason: A CIA Account of Traitor Aldrich Ames and the Men He Betrayed, said she and co-author Jeanne Vertefeuille would not have written the book if they hadn’t been allowed to tell the stories of the men who died because of the actions of Ames.

“Jeanne and I would not have published Circle of Treason if CIA’s review board had not allowed us to tell their stories in what we considered sufficient detail,” Grimes said. “These brave men knew when they agreed to work for the United States government they were putting their lives in our hands, and we failed them. We certainly couldn’t repay them for their sacrifices or their families for their losses, but we owed each and every one of them an answer.”

Wippl discussed his experience working on the Aldrich Ames damage assessment team and the persistent danger of moles within intelligence agencies.