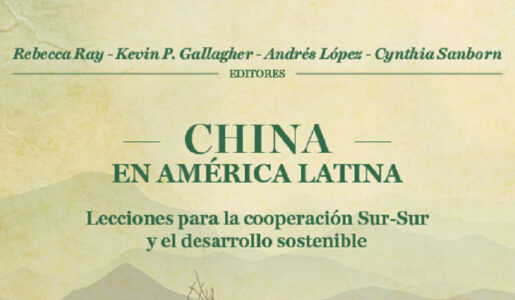 Research by the Global Economic Governance Initiative (GEGI), a research initiative at the Frederick S. Pardee School of Global Studies at Boston University, was recently referenced in an article in the journal Vistazo.

According to the book “China en América Latina: Lecciones para la Cooperación Sur-Sur y el Desarrollo Sostenible”, by Kevin Gallagher, professor of Global Development Policy and co-director of the Global Economic Governance Initiative, China started to import Ecuadorian oil in 2003; and between 2008 and 2012, 80% of Ecuadorian exports was directly linked to the oil industry.

In the chapter dedicated to Ecuador Rebecca Ray, research fellow at Boston University, claims that Andes Petroleum and PetroOriental produce 25% of the Ecuadorian total production. Chinese companies have been interested in the ITT since 2006, when CNPC and Sinopec bought the concessions owned by other companies, such as the Canadian Encana. At this time the Government was still supporting the idea of no oil extraction from this zone.

Rebecca Ray: “The explanation of the Chinese look at the region is based on geopolitical reasons. The U.S. has been promoting the TPP that excludes China. To maintain its international relevance, China needs to offer something else to third countries. This is one of the reasons behind the “Belt and Road Initiative”, a $4b. fund to invest in infrastructure in Asia, Africa and Europe. From the Chinese point of view, the investments in infrastructures are relatively small. China needs to find productive investments for its international reserves that rise up to more than $3b. Part of this reserve is translated in U.S. debt, which has had a low interest rate since the 2009 crisis (less that 1%). Between 2011 and 2015, the benefits of the Chinese companies in Latin America, have been focused on extractive sectors, such as oil and mining sectors. To make profits, these investments need constant energy sources of energy and transport to carry the products to the harbor. But China is not the only investor in infrastructure in the zone, although given its size it is the one that loaned the most.”

You can learn more about GEGI here.