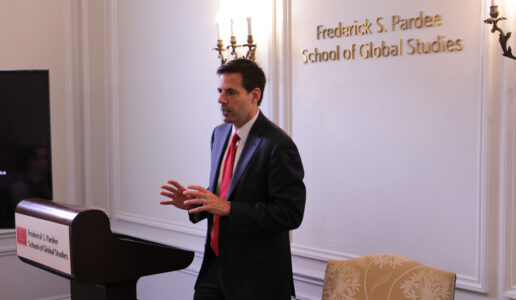 The honorable John P. Carlin, Assistant Attorney General of the National Security Division of the U.S. Department of Justice, spoke at the Frederick S. Pardee School of Global Studies at Boston University on September 29, 2016 on  international and domestic terrorism, espionage, cyberterrorism and other national security threats.

The lecture was followed by a question-and-answer session moderated by John D. Woodward Jr., Professor of the Practice of International Relations at the Pardee School and a former Central Intelligence Agency officer.

“If you had told those of us in this field after September 11 that 15 years later we prevented Al Qaeda from committing another large scale, spectacular attack people would have been surprised,” Carlin said. “The model in that sense has worked to date. I qualify it because there’s no doubt it in my mind that Al Qaeda still wants to commit that large scale, spectacular attack as do their affiliates.”

As the United States has become more successful at preventing large scale attacks, terrorist organizations have adopted their strategies of attack, according to Carlin.

“As we got better at disrupting that complex, centrally-driven hierarchical threat, we’ve seen a change in the strategy of terrorist groups,” Carlin said. “The Islamic State has adopted a new strategy of essentially crowd sourcing terrorism. They take social media, something that is by and large good, exploit it and try to use it as a tool to attract recruits and to encourage people to commit attacks where they live.”

Carlin also discussed the necessity for the United States government to work with technology companies in developing ways to prevent terrorist organizations from using social media platforms and other technologies in their recruitment process.

“Our companies, our engineers created the platforms the terrorists are using to exploit people — and none of them designed them to be exploited by terrorists. There is no country in the world that has better expertise on advertising and using social media platforms,” Carlin said. “We need to figure out a way in government to explain what the treat is, and then allow them to use the same creativity they use to sell other products to come up with ways to keep terrorists from exploiting their platforms.”