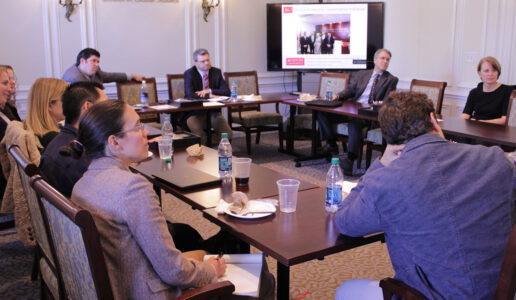 The Global Economic Governance Initiative (GEGI), a research initiative at the Frederick S. Pardee School of Global Studies, held its annual retreat on September 26, 2016 to discuss plans for the upcoming year.

Kevin Gallagher, Professor of Global Development Policy and GEGI Co-Director, introduced William Kring as the new Assistant Director of the initiative and gave an overview of what the initiative accomplished over the past year.

“We are doing a project with the United Nations Conference on Trade and Development where they’ve asked us to do two papers — one that looks at alternatives to the International Monetary Fund and another paper that looks at Southern-lead, relatively larger development banks that focus on infrastructure to draw lessons for the new BRICS bank.”

GEGI is hosting an United Nations Conference on Trade and Development Report Workshop on October 11, 2016.