BtH: NATO, the EU and Russia 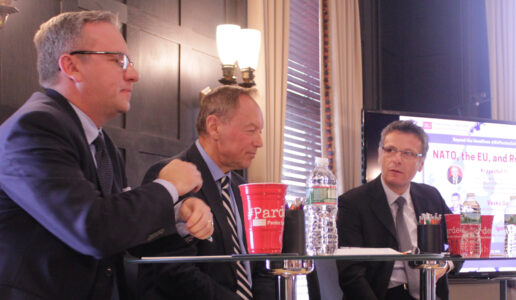 The Beyond the Headlines, or BtH, series at the Fredrick S. Pardee School of Global Studies at Boston University returned on September 23, 2016 with a panel discussion on the emerging geopolitical situation in Europe in regards to the North Atlantic Treaty Organization (NATO), the European Union (EU) and Russia.

State Secretary Szczerski discussed the benefits of European unity from the Polish perspective in light of the recent British referendum to leave the European Union.

“Poland always benefits from European unity, and it always carries the burden of the disunity of Europe,” Szczerski said. “When Europe is divided into spheres of influence, divided by geopolitics, when there is no respect for the smaller or medium-sized countries — Poland always loses in that moment. What is the most important part of our political agenda in the international relations scene in this context is to keep the unity of Europe and to keep the transatlantic unity. Poland would like to keep the European Union together after the Brexit referendum because now what worries us the most is that the Brexit referendum not only shows the distrust over EU institutions, but also may start a domino effect or a kind of cracking of European unity.”

Amb. Garčević discussed his experience serving as National Coordinator for NATO in Montenegro, where he managed inter-agency coordination and NATO public campaign promoting Montenegro’s membership to the organization. Amb. Garčević stressed the importance of NATO’s open-door policy to European countries.

“NATO’s open-door policy is important for countries like Poland and the Czech Republic for the democratic transition of those countries and for projecting stability and security in Europe,” Garčević said.

Amb. Garčević explained why NATO membership for countries like Montenegro is beneficial to both the country and the organization.

“It was a question posed by many NATO states when the issue of Montenegrin NATO membership was discussed,” Garčević said. “If you are about to invite a country that is small in size with a limited number of soldiers people will ask what benefit do we get from having this country in NATO, but the issue is more complex and should be seen from many different angles. One of those angles is that there was only one small area on the northern part of the Mediterranean which was not part of NATO and it was the coast of Montenegro. So now with Montenegro as part of NATO the entire northern part of the Mediterranean is part of NATO.”

State Secretary Szczerski discussed why NATO remains beneficial to both the United States and European countries like Poland and Montenegro.

“You have to ask why NATO was created, and why do you spend the money on the national armies within the NATO alliance,” Szczerski said. “I don’t feel comfortable when I hear the debate in the United States that we are paying for European security. Paying for NATO is also paying for the United States security.”

Lukes commended Poland for their vocal opposition to the annexation of Crimea by the Russian Federation, and discussed how it bolstered their standing within both the European Union and NATO.

“I was truly proud of how this country stood up immediately and perceived its importance in telling the world that this is a significant violation of the world order, and when all the others were finding excuses to do nothing, the Poles immediately took the lead on this and acquired real standing at that time both with the EU and with NATO,” Lukes said.