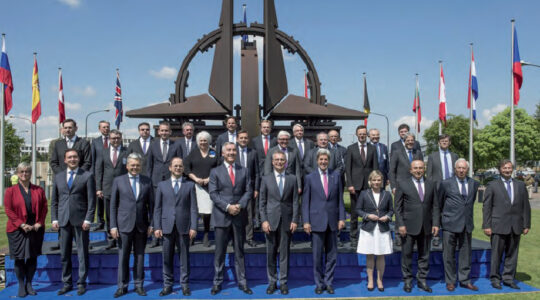 Amb. Vesko Garčević, Professor of the Practice of International Relations, was recently interviewed on the key motives behind the Montenegrin government seeking membership to the North Atlantic Treaty Organization (NATO). Montenegro was invited to join NATO in May 2016, and Amb. Garcevic served as the Ambassador of Montenegro to NATO.

Amb. Garčević was interviewed for an article entitled “NATO Welcomes a New Member,” in a recent issue of Svet A My, a Slovakian political magazine.

You have identified NATO membership as one of the strategic goals of Montenegro. What are the key motives which led the Government to take this step?

There are many reasons, and they could be divided into three categories – security, economic and political incentives.

Security benefits are obvious. Membership will help Montenegro confront more efficiently modern security challenges such as terrorism, international organized crime, cyber threats and arms proliferation. On the other hand, we have been a contributor in the NATO led operation in Afghanistan since 2008; we are a member of the Global Coalition to Counter Daesh, and, in accordance to our capacities, we actively participate in the Coalition’s information sharing and best practices, in particular through our membership of the Foreign Terrorist Fighters Working Group.

In principle, long-term security provided by the membership has a positive effect on economic and business climate. The experience of the countries that joined NATO in the last 20 years proves that integration both in NATO and the EU has been a stimulus for dynamic economic performance.

We should not forget the political aspect of this process. NATO is a security and military organization, but it is more than that, it is an alliance of states that share democratic standards embodied in Parliamentary democracy, rule of law and respect for human rights. The invitation is an acknowledgment that we have successfully met criteria for membership in NATO.

The regional aspect is not to be forgotten. This will have a positive impact on the stability of our volatile region. Stability of the Balkans means stability in Europe, I hope we’ve learned a history lesson from what was happening in Yugoslavia 20 years ago.

Vesko Garcevic served as the Ambassador of Montenegro in Brussels (NATO) and Vienna (Organization for Security and Cooperation in Europe – OSCE and other International Organizations). He was a Montenegrin Ambassador to Austria, Belgium, Luxembourg and the Netherlands. During his diplomatic career he held important positions at the challenging political time of the dissolution of the Socialist Federal Republic of Yugoslavia and democratic transition of Montenegro. After Montenegro regained independence in 2006, he served as the first Montenegrin Ambassador to Austria and the OSCE. He has outstanding knowledge of multilateral issues, especially in the field of European Security. Read more about him here.