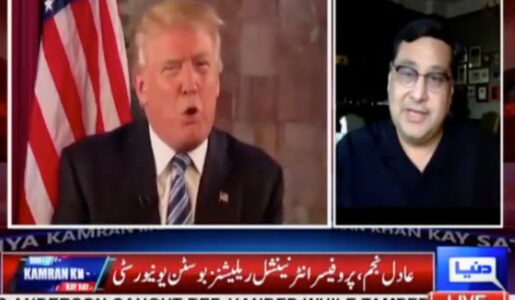 Dean Adil Najam of the Frederick S. Pardee School of Global Studies at Boston University was interviewed on the popular Pakistan television news show Dunya Kamran Khan Kay Sath on the candidacy of Donald Trump in the US Presidential elections.

Discussing the international implications of a Trump candidacy, and possible presidency, Najam was asked about how Donald Trump’s recent statements on Russian leader Vladimir Putin might impact US international security considerations. Najam pointed out that while there has been a lot of recent discussion on Donald Trump’s statements about Russia and its president, the deeper concern has been about what a Trump candidacy might be doing to the international reputation of the American electoral process.

Najam suggested (view interview video here) that the level of rhetoric and attack from both candidates has reached a new and uncomfortable level and the process is beginning to look like a television reality show. He pointed out that beyond whatever is seen and discussed within the United States, this rhetoric has implications on how the United States, its politics, and its politicians are seen abroad. And that the view has not been a very pleasant one for the USA’s international image.

The full interview (in Urdu) can be viewed here. Read more about Dean Adil Najam.