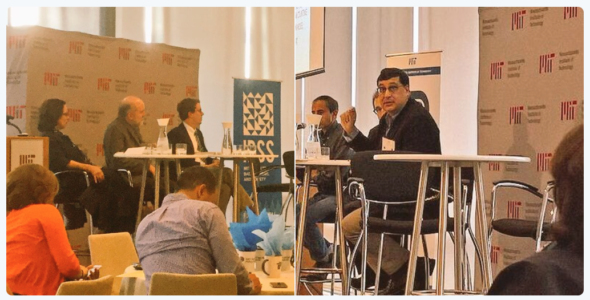 Professors Adil Najam and Jessica Stern of the Boston University Frederick S. Pardee School of Global Studies were both invited speakers at the 40th Anniversary Symposium of MIT’s Technology and Policy (TPP) program. The all day celebration, held on May 20, 2016, marked the 40th anniversary of the TPP program at the Massachusetts Institute of Technology (MIT), of which both Dean Najam and Prof. Stern are alumni.

Najam spoke on the panel on ‘Technology, Development and Sustainability’ where he focused on the case of global climate change. He argued that although there has been much activity in this area and while technologists and analysts have been “kept busy,” real and meaningful progress has been mostly missing. He called this a “failure” of his own generation which had ignored the dimension of “global justice” that lies at the heart of this critical issue.

Stern spoke on the panel on ‘Technology, Conflict and Cooperation’ which looked, apart from other issues, at how information and security have become entwined and are likely to become ever more closely tied together. The panel also looked at the Iran nuclear deal and the aspects of technology and policy related to it.

Both Prof. Jessica Stern and Prof. Adil Najam hold Master’s degrees (SM) from the MIT Technology and Policy Program. The event was attended by faculty, students and alumni of the program as well as a large number of scholars and practitioners working in the area of technology and policy.