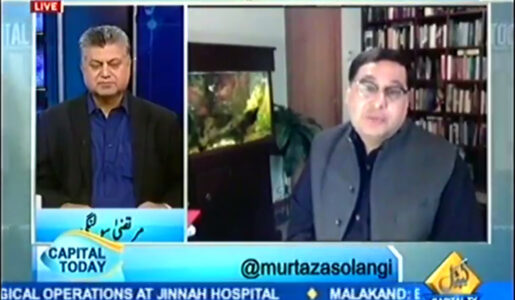 Adil Najam, Dean of the Frederick S. Pardee School of Global Studies at Boston University, was interviewed on Pakistan’s Capital TV  on how climate change directly affects endangered species such as the snow leopard and the Indus River blind dolphin, both of which are indigenous to Pakistan.

Najam was interviewed for a May 17, 2016 segment on Capital Today entitled “Snow Leopard and Indus Dolphin in Danger.” He suggested that climate change has now drastically threatened the habitats of these key species and also of humans. However, he pointed out that there was still time to save these species, especially the Indus River blind dolphin which is also threatened by loss of habitat due to irrigation structures.

You can watch the entire interview below:

You can also watch the interview on YouTube here.

Dr. Adil Najam is the inaugural Dean of the Frederick S. Pardee School of Global Studies at Boston University. Earlier, Prof. Adil Najam served as Vice Chancellor of the Lahore University of Management Sciences (LUMS) in Lahore, Pakistan and as the Director of the Boston University Pardee Center for the Study of the Longer-Range Future. Najam was recently re-elected to the international Board of Trustees of WWF-International, one of the largest conservation organizations in the world.