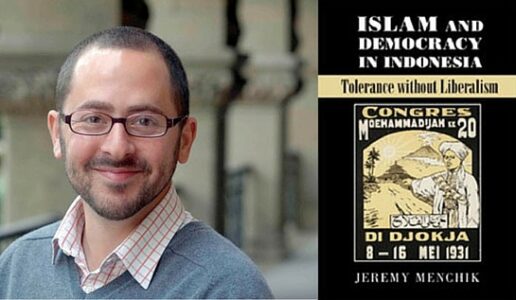 Jeremy Menchik, Assistant Professor of International Relations at the Fredrick S. Pardee School of Global Studies at Boston University, recently had his book, Islam and Democracy in Indonesia: Tolerance Without Liberalism, reviewed in the New York Review of Books.

The book was reviewed for the May 26, 2016 issue of the publication, in a piece entitled “Indonesia: The Battle Over Islam.”

Jeremy Menchik, who teaches at Boston University, describes the views of Islamic leaders on tolerance, and his book helps explain why conservative Islam is so potent. He starts with the Indonesian constitution, which promises religious freedom but also requires belief in one god, thereby entangling the Indonesian state, with its five hundred local branches, in religious affairs but also leaving unclear much about the relation of the state to religion. The lack of clarity causes contention. In 2010, Indonesia’s Constitutional Court—one of the new Reformasi institutions—agreed to rule on the constitutionality of a forty five -year-old blasphemy law. Liberals hoped that the court would decide that religious freedom trumped the state’s attempts to enforce piety. The liberals lost. The court’s decision was a heavy blow to the pluralist conception of a democratic state based on human rights. The court ruled that the “state—consistent with the mandate of the Constitution—also has a responsibility to upgrade piety and noble character.” …

According to Menchik, along with the Sipilis fatwas and the empowering of the Ulama Council, the ruling entrenched the notion that it is the proper task of the state to enforce piety. He calls the result “godly nationalism,” which means that as long as citizens believe in one of the state­ sanctioned pathways to God, they become full members of civil society and receive state protection and other benefits of citizenship…. For a godly nation to endure, it must privilege some beliefs and prosecute acts of deviance as blasphemy.

Menchik writes that the embrace of godly nationalism by Indonesia’s political elite and the leaders of the main Islamic organizations allows for a degree of tolerance in Indonesia, but without genuine liberalism. Religious nationalism gives the state the power to limit pluralism by excluding nonbelievers, heterodox groups, and any other fringe sect. As a result, Ahmadis are beyond the boundary of Indonesia’s “generally tolerant brand of Islam.” But more than that, he thinks their exclusion tends to increase solidarity among Indonesia’s fractious Islamic organizations.

Jeremy Menchik’s research interests include comparative politics, religion and politics, Southeast Asia, and the Middle East. His work has appeared in Comparative Studies in Society and History, Southeast Asia Research, and is forthcoming in Comparative Politics. At Boston University he is a member of the graduate faculty of political science and religious studies, and coordinates the MA program in IR and Religion.

To order Islam and Democracy in Indonesia or for more information, please click here.