Stern in Christian Post: The Contradictory Goals of ISIS 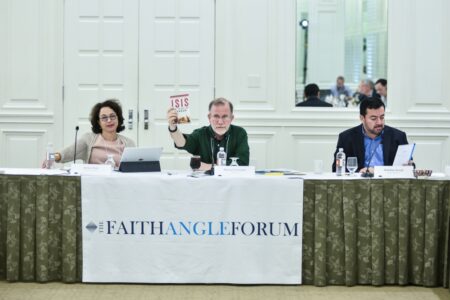 Jessica Stern, Research Professor at the Frederick S. Pardee School of Global Studies at Boston University, was a speaker at the recent Faith Angle Forum, a meeting that convenes journalists and scholars to delve deeply into issues related to religion, culture and current events.

Stern’s remarks from the forum were quoted in a May 4, 2016 article in Christian Post entitled “How Both Barack Obama and Donald Trump Inadvertently Help ISIS.”

Stern also pointed out that Trump is helping ISIS’ recruitment with his rhetoric.

ISIS has two contradictory goals, Stern explained. It wants to establish a caliphate, or its own nation-state, in Iraq and Syria, and it wants a final, end times battle with the West at Dabiq. (It’s online magazine is called “Dabiq.”)

While those goals are contradictory, there is one method that furthers both of those goals — making Muslims living in Western nations feel unsafe.

“And for this reason,” Stern explained, “I do believe that Trump is falling into a trap. He is helping to destroy that gray zone by making Muslims in the West feel unsafe. If ISIS attacks in the West, it goads us into attacking it in Syria. But ISIS’ leaders hope that these attacks in the West will ultimately make Western Muslims feel unsafe, and they hope, more vulnerable to being recruited to ISIS’ side.The more ISIS can increase prejudice against Muslims in the West, the more it can actually pursue both parts of its agenda.”

Jessica Stern’s main focus is on perpetrators of violence and the possible connections between trauma and terror.  She has written on terrorist groups across religions and ideologies, among them neo-Nazis, Islamists, anarchists, and white supremacists.  She has also written about counter-radicalization programs for both neo-Nazi and Islamist terrorists.  She has been working with a team at Boston Children’s Hospital on the risk factors for violence among Somali-refugee youth.  She is currently working on a study of Radovan Karadzic, indicted for war crimes in Bosnia. You can learn more about her here.