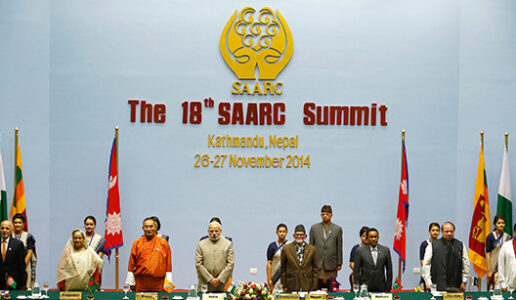 Manjari Chatterjee Miller, Assistant Professor of International Relations at the Frederick S. Pardee School of Global Studies at Boston University, published a recent policy brief for the Atlantic Council on how India’s  increasing leadership in the South Asian Association for Regional Cooperation (SAARC) may lead to broader connectivity and cooperation in the region.

The brief, entitled “Cooperation in South Asia: The Case for Redefining Alliances,” was co-authored by Bharath Gopalaswamy and published on April 26, 2016.

From the text of the brief:

India’s relationships with Pakistan, Bangladesh, and Sri Lanka are all problematic. However, while the India-Pakistan bilateral relationship will continue to be conflictual, especially in the short term, the India-Sri Lanka and India-Bangladesh relationships look more promising and offer an opportunity for SAARC’s success. Currently, Bangladesh and Sri Lanka have governments that are politically favorable for India and that have promoted stronger bilateral relationships with it. In addition, Prime Minister Modi has made the South Asia region central in his foreign policy. This is, thus, the optimal time for facilitating cooperation in SAARC through a two-pronged approach: bypass Pakistan while maintaining engagement and promote subregional groupings within SAARC.