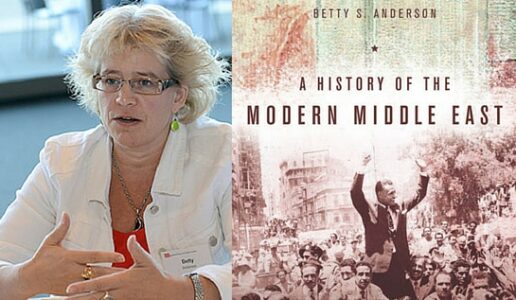 Betty Anderson, Director of the Institute for the Study of Muslim Societies and Civilizations at the Frederick S. Pardee School of Global Studies, published a new book through Stanford University Press entitled A History of the Modern Middle East: Rulers, Rebels, and Rogues.

In the book, Anderson offers a comprehensive assessment of the region, stretching from the fourteenth century and the founding of the Ottoman and Safavid empires through to the present-day protests and upheavals.

Anderson focuses on Turkey, Iran, and the Arab countries of the Middle East, as well as areas often left out of Middle East history—such as the Balkans and the changing roles that Western forces have played in the region for centuries—to discuss the larger contexts and influences on the region’s cultural and political development.

“Many of the available introductory histories of the modern Middle East overemphasize the role of European powers and the top down authoritarian nature of the state,” said Noora Lori, Assistant Professor of International Relations. “Betty Anderson’s pathbreaking and multilayered account focuses on coalitions and networks and shows how groups can at once be subnational and transnational, creating an account of foreign intervention that does not rob the region’s people of agency. An essential book for any instructor, scholar, or student of Middle East history, politics, society, and culture.”

Enriched by the perspectives of workers and professionals; urban merchants and provincial notables; slaves, students, women, and peasants, as well as political leaders, A History of the Modern Middle East maps the complex social interrelationships and provides a pivotal understanding of the shifting shapes of governance and trajectories of social change in the Middle East.

Dr. Anderson has received Fulbright and American Center for Oriental Research (ACOR) grants to conduct research in Jordan and Lebanon. At Boston University, she is Director of the Institute for the Study of Muslim Societies and Civilizations, as well as the Institute’s advisor to the two Muslim Studies Minors. You can read more about her here.