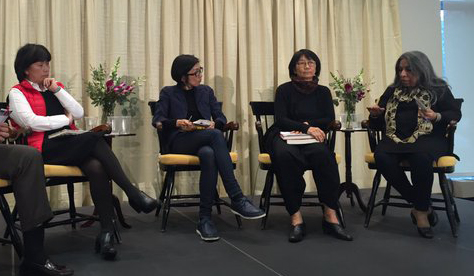 The Center for the Study of Asia (BUCSA), an affiliated regional studies center of the Frederick S. Pardee School of Global Studies at Boston University, kicked off their Asian Women Leaders Forum on April 8, 2016 with a public forum featuring four Asian women who have been pioneers in fields including publishing, social activism, art and feminism.

Butalia said she didn’t begin her career in publishing with the intention of becoming a leader in the field, but developed a sense of responsibility that came along with her successes.

“I didn’t set out with any notion of being a leader, but basically just filling a gap that existed and that no man that I worked with or that I knew seemed to even begin to understand,” Butalia said. “At some stage I did realize that I have responsibility for the people that work with me, the subject I have chosen to work on and the ramifications of that subject in the wider world.”

Lung discussed her roles as a writer, critic and Culture Minister, and how her perspective affects those roles.

“When I write, or even when I make policies, I never think to myself ‘I’m a woman,’” Lung said. “This consciousness, it’s just not there–I just work, I write, I make policies.”

The weekend-long event continued on April 9, 2016 with workshops on social activism and policy making with Deepti Nijhawan, Director of BU’s India Initiatives, and  Elizabeth Perry, Henry Rosovsky Professor of Government at Harvard University, serving as moderators.

Catherine Yeh, Director of BUCSA and Professor of Chinese and Comparative Literature, said she hoped the forum served as an opportunity to recognize the four speakers for their contributions to their respective fields, but also for the advancements they have each made in the struggle for gender rights and equality.

“In particular, we want to honor them in the field of political-economic life, the field of art and culture, but more importantly their contribution in the struggle for gender equality, achievement in social justice, policy making and social activism through art and culture,” Yeh said.

The forum was organized in partnership with the BU Center for the Humanities, College of Arts and Sciences, Women’s, Gender and Sexuality Studies Program, Department of Modern Languages and Comparative Literature.