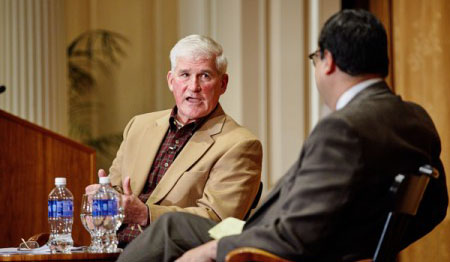 In the book, Bacevich, a graduate of the U.S. Military Academy who taught at West Point and Johns Hopkins before joining the Boston University faculty, provides a searing reassessment of U.S. military policy in the Middle East over the past four decades. 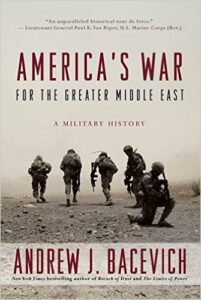 “Writing books is hard work.  Getting readers to notice your book when it comes out is harder still — especially when the country is abuzz with the latest foolishness committed by candidates for the presidency,” Bacevich said. “But I’ve got my fingers crossed that at least some folks will notice this one.”

You can purchase a copy of the book here.

A video of Bacevich’s talk at the Second Pardee School Inaugural Year Lecture, which was based on the book as he was working on it can be viewed here:

Bacevich also taught a Pardee School online course (MOOC) that is based on the research that has led to this book. Details on the Pardee School MOOC on ‘War in the Greater Middle East’ can be found here.

Andrew Bacevich’s essays and reviews have appeared in a variety of scholarly and general interest publications including The Wilson Quarterly, The National Interest, Foreign Affairs, Foreign Policy, The Nation, and The New Republic. His op-eds have appeared in the New York Times, Washington Post, Wall Street Journal, Financial Times, Boston Globe, and Los Angeles Times, among other newspapers. In 2004, Bacevich was a Berlin Prize Fellow at the American Academy in Berlin. You can read more about him here.