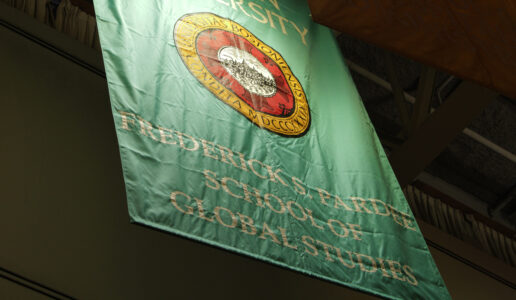 The Frederick S. Pardee School of Global Studies at Boston University is now represented with a school flag inside Metcalf Hall at the George Sherman Union.

The Pardee School flag, which now hangs alongside the flags for BU’s other schools and colleges, is aquamarine to represent the academic colors for International Programs and Studies.

The Pardee School of Global Studies was borne out of Boston University’s longstanding commitment to global issues, the legacy of excellence of the many academic units that now constitute the School, and the vision and generosity of the benefactor whose name it bears.

The $25 million gift from Fred Pardee and the University’s decision to launch the new School was announced in December 2013.