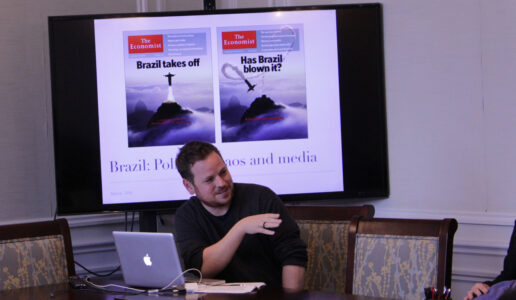 The Latin American Studies Program, an affiliated program of the The Frederick S. Pardee School of Global Studies, hosted Fabiano Maisonnave, senior reporter and editorial writer for Folha de S.Paulo, for a conversation on the narratives in the Brazilian media on the country’s simultaneous crises including the Zika virus, economic recession and the impeachment process of President Dilma Rousseff.

Maisonnave said Brazil is quickly accumulating crisis after crisis, and the major news outlets in Brazil are beginning to fail to tell all sides of each crisis to the Brazilian public.

“You can see that there is a clear choice of narrative and that is what is becoming very dangerous in Brazil,” Maisonnave said.

According to Maisonnave, newspapers in Brazil have to be more accountable now due to the Internet and social media, but that hasn’t necessarily translated into the Brazilian media becoming more democratic.

Maisonnave noted that he is currently on a sabbatical period and that the views expressed in his talk were his own.