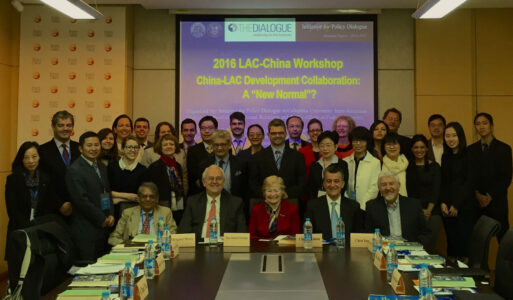 Three members of the Global Economic Governance Initiative (GEGI), a research initiative at the  Frederick S. Pardee School of Global Studies, along with Pardee School Senior Visiting Fellow Rogerio Studart, will travel to China the week of March 20, 2016 to hold workshops and policy dialogues on Chinese development finance in Latin America and beyond.

On Thursday, March 24, 2016 GEGI is co-sponsoring an event with the Chinese Ministry of Environment’s Foreign Cooperation Division and the Paulson Institute on “Green Investment and Development Finance in China’s Overseas Investment,” at the Chinese Ministry of the Environment in Beijing.  There GEGI Co-Director Kevin P. Gallagher will be joined by GEGI Researchers Fei Yuan and Rebecca Ray for a discussion of their reports, “Greening Development Finance in the Americas” and “China in Latin America: Implications for South-South Coopearation and sustainable Development.”

This week also marks the release of Gallagher’s new book The China Triangle: Latin America’s China Boom and the Fate of the Washington Consensus by Oxford University Press.  Gallagher will be discussing the book at academic venues while in China as well.

GEGI researchers will also hold private consultations at the New Development Bank and the Asian Infrastructure Investment Bank to explore ways in which our research and networks can be useful for these dynamic new institutions.

The Global Economic Governance Initiative is a research program of the Center for Finance, Law & Policy, the Frederick S. Pardee School of Global Studies and the Frederick S. Pardee Center for the Study of the Longer-Range Future. It was founded in 2008 to advance policy-relevant knowledge about governance for financial stability, human development, and the environment.