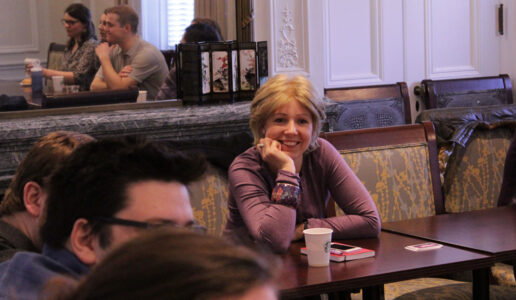 Susie Kitchens, British Consul General in Boston, visited the Frederick S. Pardee School of Global Studies at Boston University on March 18, 2016 to speak to the Pardee Graduate Council  about her time as Consul General as well as her previous experience as Deputy High Commissioner at the British High Commission in Tanzania.

During the talk, which was attended by 18 graduate students, Kitchens discussed the skill set for diplomatic jobs and how getting to know the region you’re working in can influence policy.

“There are lots of different things, but the actual skill set is pretty standard. It’s about knowing people, knowing your region and using that to inform what we can do to benefit the U.K.,” Kitchens said.

Kitchens said during her time spent in Boston, she has learned a lot about entrepreneurship can influence policy and vice versa.

““I’m learning a lot of policy lessons around entrepreneurship in particular, which is such a strong theme in this part of the world, and in the U.K. is not quite there yet.”

Several students asked Kitchens about her feelings on the current debate in the U.K. over a June 23, 2016 referendum on whether or not the U.K. will remain in the European Union.

“The government line continues to be we are stronger within Europe and Europe is stronger with the U.K. inside of it,” Kitchens said. “The main issue that we’re talking about around the world at the moment is informing our expatriates that they must register to vote.”

Kitchens compared the current decision U.K. citizens are faced with to the 2014 referendum on Scotland’s independence, and said it’s a sign that democracy is alive and well within the U.K.

“What I feel proud of is we have this very vibrant democracy within the U.K. and similarly we had the Scottish referendum a couple of years ago, and the topic was incredibly divisive,” Kitchens said. “The fact that we were going through this process seemed bonkers to most of the world, but it was democracy in action.”

Kitchens’ diplomatic career has also included postings in the Foreign and Commonwealth Office in London (on bilateral relations with Latin America, Consular policy and on the United Nations Security Council) and also as Political Officer at the British Embassy in Guatemala.