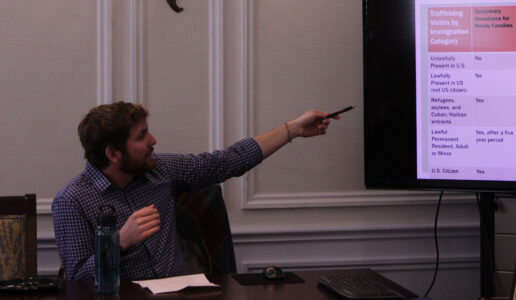 The Initiative on Forced Migration and Human Trafficking (FMHT) at the Frederick S. Pardee School of Global Studies at Boston University hosted a discussion March 18, 2016 on human trafficking and the United States healthcare environment.

Medical Anthropology MS candidate Jeff Nicklas led the talk, and provided a background on human trafficking and the political-economy of access to care. He also shared his research plan regarding access to healthcare among survivors of human trafficking in the United States.

Nicklas said he wants research for his thesis to focus on highlighting the individuality of each human trafficking survivors experience going through the U.S. healthcare system.

“I want to understand the experience of survivors in the United States, I want to have better informed healthcare practitioners, to hear the voices of these people, to address the gaps in policy and rhetoric toward human trafficking and provide a comprehensive picture of the systems of care provided to people that make it through the system but also fall through the cracks,” Nicklas said.

According to Nicklas, his research shows time healthcare providers are spending with human trafficking survivors is often not adequate to address the health issues the survivors are dealing with.

“To the extent that they’re exposed to the patient, they’re doing a pretty good job but they’ve even told me every evaluation ends with them saying we recommend they seek trauma-informed mental health services, but there’s no system for that,” Nicklas said. You can have as many recommendations as you want, but if there’s no system for them to do that and they’re a potentially recently arrived immigrant then what services are available?

The Pardee School Initiative on Forced Migration and Human Trafficking brings together students, scholars, practitioners and policy-makers to support research, education,and advocacy on the pressing issues of forced migration and human trafficking.