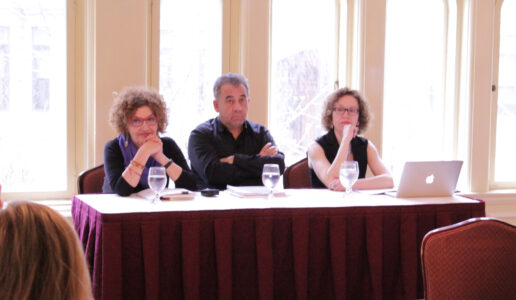 The Latin American Studies Program, an affiliated program of the The Frederick S. Pardee School of Global Studies, held a symposium and concert on March 14, 2016 focusing on contemporary use of Ladino, a language derived from medieval Spanish, with influences from such languages as Aragonese, Astur-Leonese, Catalan, Galician-Portuguese, and Mozarabic.

The symposium was attended by about 50 people and started with a panel focusing on contemporary Ladino as a vehicle of cultural articulation among Jewish people in Latin America and beyond, in particular those who do not share in the dominant culture’s understanding of what it means to be Jewish, or Latin American. The panel included Mexican poet Myriam Moscona, Mexican writer and novelist Jacabo Sefami and Ladino scholar Monique Balbuena.

Balbuena said Ladino has become increasingly popular as a cultural language among artists, including musicians, poets and writers.

“Ladino has become the language of choice for a series of musicians and writers,” Balbuena. “Ladino is gaining momentum as a cultural language, a language with which the ties with the past are tightened and hopes for the future are consciously crafted.”

According to Balbuena, Sephardic artists have turned to Ladino as a way to identify with their cultural history or their own family history.

“Ladino is used to carry on different poetic projects,” Balbuena said. “Sephardic artists turn to the collection of Ladino sayings and songs as a gateway to their own culture or use the language as a vehicle to express their childhood memories and maintain the legacy of their family, thus affirming their identity and links to the great Sephardic nation.”

The symposium also included a trilingual poetry reading in Ladino, Spanish and English, a Sephardic Music concert and a reception.