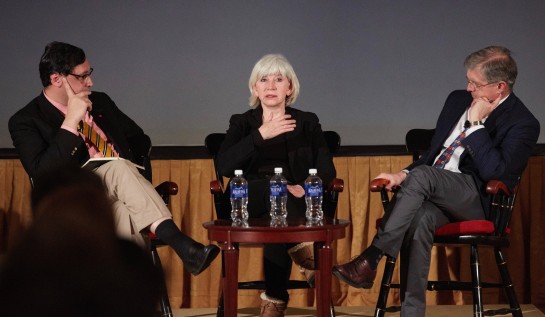 Laurence Tubiana, France’s Special Representative to the Paris climate change talks last December spoke publicly for the first time on February 8, 2016 at the  Frederick S. Pardee School of Global Studies, providing an inside account of the progress made during the negotiations.

After providing a detailed account of the negotiations, Amb. Tubiana was joined by Dean Adil Najam of the Pardee School and Pardee Center Director Anthony Janetos for a discussion about the climate talks. The moderated discussion included a question-and-answer session with the audience.

Tubiana’s talk, the panel and the question-and-answer session can be viewed here.

Tubiana was the featured speaker at the event titled “The Paris Climate Deal: An Inside Account of How It Happened,” co-sponsored by the Frederick S. Pardee School of Global Studies and the Frederick S. Pardee Center for the Study of the Longer-Range Future at Boston University. Some 100 people turned out on a snowy afternoon for the talk.

A globally recognized expert on climate and development issues, Amb. Tubiana was a key architect of the Paris climate deal and a leading figure in coordinating the 2015 global climate change negotiations. A New York Times article profiled her role combining expertise in international diplomacy, French hospitality, and a detailed knowledge of the issues to set the stage that led to the historic agreement.