Lecture Focuses on Changes Under Buhari 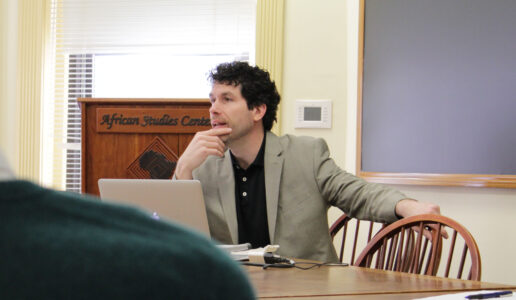 Kew focused on how Buhari’s presidency has changed the political landscape in Nigeria, and what changes still need to be made moving forward.

According to Kew, Buhari’s election in 2015 as part of the All Progressives Congress party proved important in creating legitimate opposition to then-incumbent President Goodluck Jonathan.

Kew said while the 2015 Nigerian elections that saw Buhari elected were an important step in the right direction for the Nigerian political process, there are still many challenges facing the the newly-elected President.

“You see the Buhari administration hampered by having no serious cabinet in place until recently and complete legislative deadlock over simply who is going to be in key positions in the legislature,” Kew said. “Even after those positions have been decided there is an ongoing power struggle over who is in control.”

Darren Kew studies the connection between democratic institution building in Africa and the development of political cultures that support democracy, particularly in terms of the role of civil society groups in this development. He is the Chair of the Department of Conflict Resolution, Human Security and Global Governance at UMass Boston.