Islam and Democracy in Indonesia: Tolerance Without Liberalism was released in January 2016. 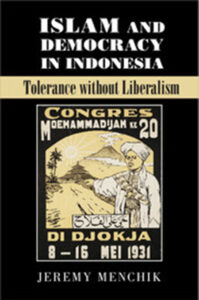 Menchik argues that answering these questions requires decoupling tolerance from liberalism and investigating the historical and political conditions that engender democratic values. Drawing on archival documents, ethnographic observation, comparative political theory, and an original survey, Islam and Democracy in Indonesia demonstrates that Indonesia’s Muslim leaders favor a democracy in which individual rights and group-differentiated rights converge within a system of legal pluralism, a vision at odds with American-style secular government but common in Africa, Asia and Eastern Europe.

“Political underdevelopment of the Muslim world is not a result of culture it’s a result of economics and a lack of imagination in structuring political institutions,” Menchik said.

Menchik said he has been working on the book for 10 years, beginning when he was working on his dissertation in Indonesia in 2005.

“The book addresses timeless issues of tolerance and democracy in the Muslim world,” Menchik said. “They are just as salient now as they were 10 years ago.”

More information on the book, including an online order link, can be found on the Cambridge University Press website.

Jeremy Menchik’s research interests include comparative politics, religion and politics, Southeast Asia, and the Middle East. His research has received the Mildred Potter Hovland Journal Article Prize, the Best Qualitative or Multi-Method Submission to the American Political Science Review, the Graduate Student Paper Award from the Indonesia and East Timor Studies Committee of the Association of Asian Studies, and his dissertation was given Honorable Mention for the Aaron Wildavsky Award. At Boston University he is a member of the graduate faculty of political science and coordinates the MA program in IR and Religion.

To order Islam and Democracy in Indonesia or for more information, please click here.