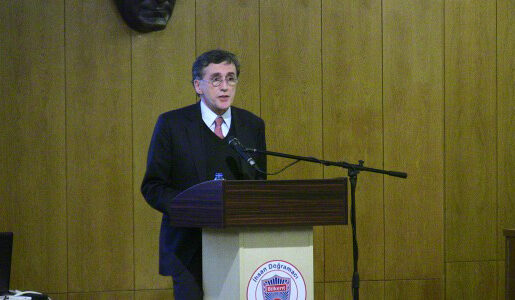 At an upcoming event organized in collaboration with the Frederick S. Pardee School of Global Studies at Boston University, attendees will follow the journey Turkey has taken from its past to its future.

The Campagna-Kerven Lecture on Modern Turkey will be held on April 20 at 4:30 p.m. in the Metcalf Trustees’ Ballroom. This year’s lecture will be the twenty-first in an annual series that began in 1996.

The featured speaker for 2016 is Professor Reşat Kasaba, Director of the Jackson School of International Studies at the University of Washington. The working title of the lecture is “Turkey’s impossible journeys from past to future and back again.”

Find out more about the event here.

“As you know, Madame Suzanne Campagna, whose yearly generosity provided the primary funding for the annual lectures, left this life in August. She was predeceased by her late spouse Gerard Campagna, who earned his Ph.D. from BU,” said Augustus Richard Norton, Professor of International Relations and Anthropology at the Pardee School, who is one of the main organizers of the event. “She was a longtime supporter of Boston University, and her generosity continues to insure that the lecture series continues in perpetuity beginning in 2017.”

This year the lecture is being supported by the College of Arts and Sciences, the Institute for the Study of Muslim Societies and Civilizations, the Institute for Iraqi Studies, BCARS (Boston Consortium for Arab Region Studies), a private gift, and the Pardee School.

The event will include a tribute to Suzanne Campagna, as well as the inauguration of a new Campagna-Kerven Fellowship for a doctoral student whose research and dissertation deals substantially with modern Turkey.

Following the lecture and questions from the floor for Professor Kasaba, there will be reception in honor of the speaker.

Reşat Kasaba is Stanley D. Golub Chair and Professor of International Studies at the University of Washington.

Kasaba’s main area of research has been the Ottoman Empire, Turkey and the Modern Middle East. He has written on economic history, state-society relations, migration, ethnicity and nationalism, and urban history. Most recently, he edited volume four of the Cambridge History of Modern Turkey and wrote A Moveable Empire: Ottoman Empire, Migrants, and Refugees. Kasaba has received grants from the Andrew Mellon Foundation, Social Science Research Council, and the National Science Foundation. In 1999, he was the recipient of the University of Washington’s Distinguished Teaching Award.