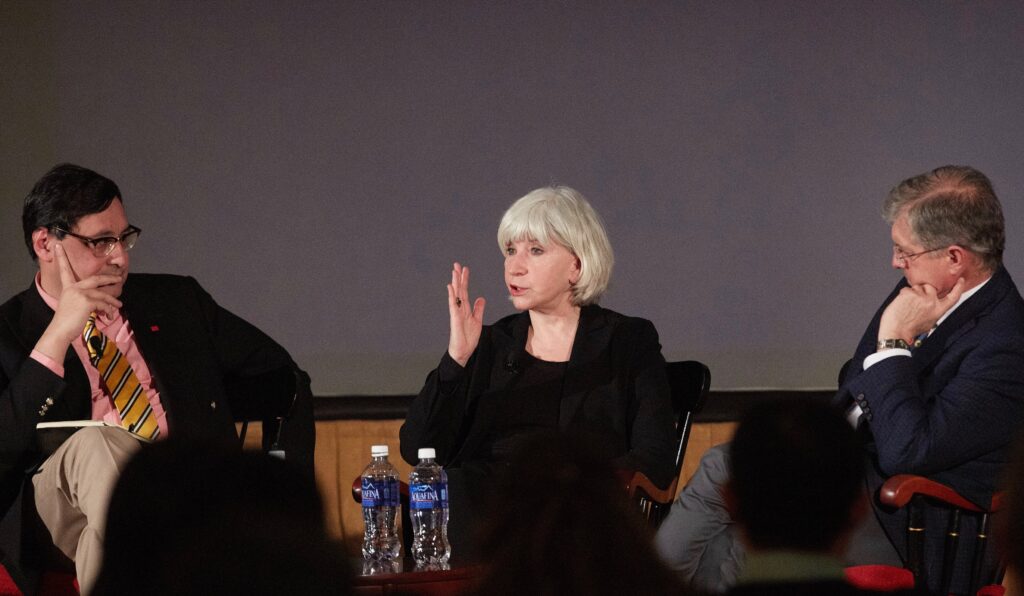 Laurence Tubiana, France’s Special Representative to the Paris climate change talks last December spoke publicly for the first time on Feb. 8, 2016, at Boston University about what it took to orchestrate both the two-week long climate change negotiation session and the agreement that came out of it.

Ambassador Laurence Tubiana was the featured speaker at the event titled “The Paris Climate Deal: An Inside Account of How It Happened,” co-sponsored by the Frederick S. Pardee School of Global Studies and the Frederick S. Pardee Center for the Study of the Longer-Range Future at Boston University. Some 100 people turned out on a snowy afternoon for the talk, which was also webcast live.

A globally recognized expert on climate and development issues, Amb. Tubiana was a key architect of the Paris climate deal and a leading figure in coordinating the 2015 global climate change negotiations. A New York Times article profiled her role combining expertise in international diplomacy, French hospitality, and a detailed knowledge of the issues to set the stage that led to the historic agreement.

In a remarkably candid and detailed inside account of the Paris climate negotiations, Amb. Tubiana laid out the strategy she and her team had developed for the negotiations and how they implemented it. She acknowledged that there were many moments in the negotiation process where she was scared that the agreement that was being carefully crafted would go awry. However, in the end the agreement that was achieved was even better than what she had imagined it would be. She attributed this success to the trust that had developed amongst the key players, the changing international context for climate change, key decisions by a few important players – most notably China and the United States, and the untiring efforts of the negotiation organizers.

In particular, she said that as an academic herself, her understanding of international relations theory had been instrumental in her success as a diplomatic practitioner. As examples, she highlighted her understanding of “two-level games” and of the notion that not just an agreement but a “regime” had to be put in place. Asked what her ‘scariest moment’ was during the negotiation process, she said it came when her team had to reduce a many options that had been thrown in by different countries into a negotiating text for the countries to work on in the final stretch of negotiations.

Henrik Selin, Associate Professor of International Relations at the Pardee School, introduced Amb. Tubiana. After providing a detailed account of the negotiations, Amb. Tubiana was joined by Dean Adil Najam of the Pardee School and Pardee Center Director Anthony Janetos for a discussion about the climate talks. The moderated discussion included a question-and-answer session with the audience.

Laurence Tubiana is the French Ambassador for climate change negotiations, and the special representative of Laurent Fabius, the French minister of Foreign Affairs and International Development, for the Paris Climate 2015 conference (COP21). Tubiana founded in 2001 the Institute for sustainable development and international relations (Iddri) and has authored over a hundred papers, reports and books on these topics. She has also advised Prime Minister Lionel Jospin on sustainable development issues from 1998 to 2002, and held the position of Director of global public goods at the Ministry of Foreign affairs from 2009 to 2010. In addition, she currently chairs the Administrative council of the French Development Agency (AFD), co-chairs the Executive Committee of the Sustainable Development Solutions Network (SDSN) and is a member of the United Nations Scientific Advisory Board.