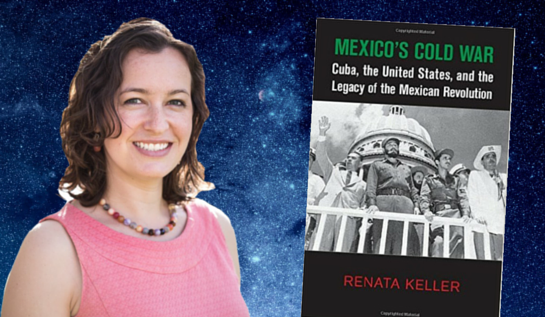 Prof. Renata Keller of the Frederick S. Pardee School of Global Studies at Boston Univeristy was interviewed (February 7, 2016) on her new book,  Mexico’s Cold War: Cuba, the United States, and the Legacy of the Mexican Revolution (Cambridge University Press, 2015). Using now-restricted Mexican security files, US government documents, and Cuban Foreign Ministry sources, Mexico’s Cold War details how the Cuban Revolution reverberated within Mexico to produce an often contradictory and frequently repressive politics that ultimately resulted in an internal dirty war–one that has parallels in the Mexico of today.

Interviewed for New Books Network, in their Latin American Studies section, Keller talked about what led her to this topic and also the challenges of doing research in Cuba. The hour long interview goes into the details of the book and its findings, including on the lessons this research offers for the fast changing US-Cuba relationship. The full interview can be heard here.

Renata Keller’s research and teaching interests focus on Latin American history, particularly the connections between foreign and domestic politics, the dynamics of the Cold War, and U.S. relations with Latin America. She has special expertise in Mexican, Cuban, Chilean, and Argentine history.