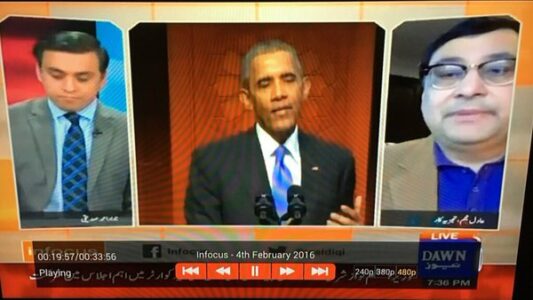 Adil Najam, Dean of the Frederick S. Pardee School of Global Studies at Boston University, was interviewed on the news talk show InFocus (February 4, 2016) on Pakistan’s Dawn News TV on the significance of US Barack Obama’s first visit to a mosque as President. President Obama had made his first visit to a mosque in the United States on Wednesday, February 3, 2016, where he said he was seeking to rebut “inexcusable political rhetoric against Muslim-Americans” from Republican presidential candidates.

“Let me say as clearly as I can as president of the United States: you fit right here,” Obama told the audience at the Islamic Society of Baltimore, a 47-year-old mosque with thousands of attendees. “You’re right where you belong. You’re part of America too. You’re not Muslim or American. You’re Muslim and American.”

Dean Najam pointed out that this visit was an act of considerable conviction for the US President because he stands to gain fairly little from it. However, given the very disturbing rise in anti-Muslim sentiment in the political debate, President Obama considered such a gesture important for the American Muslim community as well as the larger American populace.

Dr. Adil Najam is the inaugural Dean of the Frederick S. Pardee School of Global Studies at Boston University. Earlier, Prof. Adil Najam served as Vice Chancellor of the Lahore University of Management Sciences (LUMS) in Lahore, Pakistan and as the Director of the Boston University Pardee Center for the Study of the Longer-Range Future. In addition to Boston University, Prof. Najam has taught at MIT and at the Fletcher School of Law and Diplomacy, Tufts University. His research focuses on issues of global public policy, especially those related to global climate change, South Asia, Muslim countries, environment and development, and human development. Amongst other books, he is the author of  Pakistanis in America: Portrait of a Giving Community (Harvard University Press, 2006).