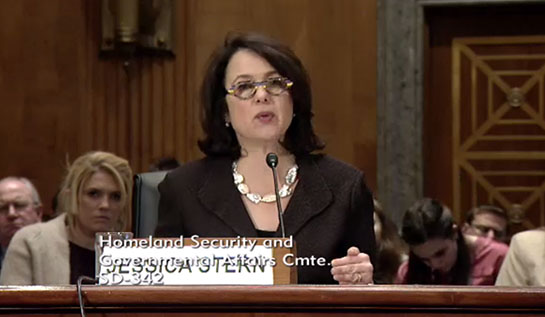 The topic of the hearing was “Inside the Mind of ISIS: Understanding Its Goals and Ideology to Better Protect the Homeland.”

Stern’s remarks specifically focused on the subject of ‘What ISIS Wants.’ She said:

I believe that one of the major gaps in our response to ISIS is the lack of investment in developing and disseminating effective counter-narratives that are compelling to the millennial youth who are ISIS’s principal targets for recruitment. To do this effectively, we need to listen closely to what ISIS says it wants to achieve, and to what it claims to offer youth. Next Fall, I will be offering a course called P2P: Challenging Extremism, under the auspices of EdVentures Partners, the State Department and Facebook. This course is quite relevant to the subject of this hearing, in that provides a pathway for university students in 30 countries (so far) to develop their own counter-narratives and digital responses to ISIS’s and other terrorist groups’ propaganda. I am proud to be part of this initiative.

The full text of Stern’s presentation can be found here.

The full hearing was video recorded and can be seen here.

Stern is the coauthor with J.M. Berger of ISIS: The State of Terror; and the author of Denial: A Memoir of Terror, selected by the Washington Post as a best book of the year; Terror in the Name of God: Why Religious Militants Kill, selected by the New York Times as a notable book of the year; The Ultimate Terrorists; and numerous articles on terrorism. Prior to joining the Pardee School faculty, she worked in government, serving on President Clinton’s National Security Council Staff and as an analyst at Lawrence Livermore National Laboratory. Learn more about her here.