Key Architect of the Paris Climate Deal to Speak at Pardee 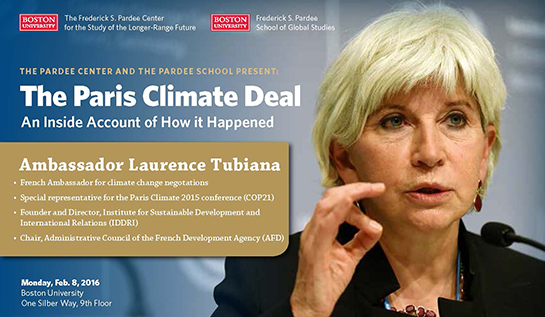 The French ambassador who played a leading role in facilitating the recent global climate change agreement in Paris will provide a “behind the scenes” account of how the pact was reached during an event on Monday, Feb. 8 co-sponsored by The Frederick S. Pardee Center for the Study of the Longer-Range Future and The Frederick S. Pardee School of Global Studies at Boston University.

“The Paris Climate Deal: An Inside Account of How it Happened,” will feature Amb. Laurence Tubiana, France’s special representative for the December 2015 UN Framework Convention on Climate Change conference in Paris (COP21). This event will take place from 4 to 5:30 p.m. on Feb. 8 at One Silber Way, 9th floor. It is free and open to the public, but advance registration is required.

A globally recognized expert on climate and development issues, Amb. Tubiana was a key figure in coordinating the global climate change talks and the ultimate agreement reached in Paris last month. A New York Times article profiled her role combining expertise in international diplomacy, French hospitality, and a detailed knowledge of the issues to set the stage that led to the historic agreement.

This event is a follow up to two seminars the Pardee Center and the Pardee School co-sponsored in the fall that focused on experts’ expectations ahead of the Paris climate change talks. A video of the first seminar is available here.

The Feb. 8 session will be webcast live starting at 4 p.m.

Laurence Tubiana is the French Ambassador for climate change negotiations, and the special representative of Laurent Fabius, the French minister of Foreign Affairs and International Development, for the Paris Climate 2015 conference (COP21). A globally recognized specialist of climate change and development issues, Mrs Tubiana founded in 2001 the Institute for sustainable development and international relations (Iddri) and has authored over a hundred papers, reports and books on these topics. She has also advised Prime Minister Lionel Jospin on sustainable development issues from 1998 to 2002, and held the position of Director of global public goods at the Ministry of Foreign affairs from 2009 to 2010. In addition, Mrs Tubiana currently chairs the Administrative council of the French Development Agency (AFD), co-chairs the Executive Committee of the Sustainable Development Solutions Network (SDSN) and is a member of the United Nations Scientific Advisory Board.