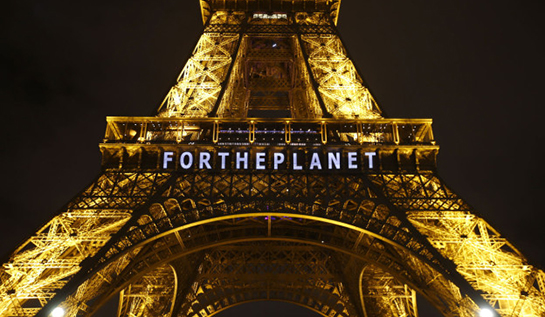 Adil Najam, Dean of the Frederick S. Pardee School of Global Studies at Boston University, said that while there was much to be concerned about in the Paris climate agreement, there was also room for some cautious hope after the UN Climate Change Conference held last December in Paris.

Najam made the case on a January 4, 2016, radio interview with the Kathleen Dunn Show on National Public Radio (NPR) station Wisconsin Public Radio. The interview was summarized in a news article on the WPR website entitled “Why A Climate Expert Is Hopeful About Climate Change After Paris.”

A recording of the full interview can be heard here.

From the text of the news article:

“I think the new direction is one that has less to do with government regulation and government responsibility, and more to do with innovation, with investment, and encouragement of new technology,” said Najam, who was part of the scientific panel that won the 2007 Nobel Peace Prize for advancing public understanding of climate change.

Renewable energy is increasingly becoming more affordable and businesses are learning to yield profits from the technology, spurring further industry development. In addition, said Najam, it’s easy to notice that there’s are an increasing amount of cars like the Prius on the road.

“The old world was where business essentially said climate change is not real, and were a resisting force,” he said. “The new world is kind of where there is at least a part of business, sometimes a significant part of business, which is saying we could benefit from this change.”

He did, however, stress that with a voluntary approach and little detail about how verification would happen, the Paris agreement was banking on hope more than solid regulatory ground. He pointed out that while Paris delegates have voted to bank on technology bringing the change, there is also great danger than the momentum and excitement of Paris may not last.

Dean Najam participated in and followed the Paris negotiations closely, writing two OpEds in the Guardian (here and here) and co-authoring another with Prof. Henrik Selin (here).

Najam is a past winner of MIT’s Goodwin Medal for Effective Teaching, the Fletcher School Paddock Teaching Award, and the Stein Rokan Award of the International Political Science Association, the ARNOVA Emerging Scholar Award, and the Pakistan Television Medal for Outstanding Achievement. In 2011, he was elected a Trustee on the International Board of WWF; and in 2013 elected a Trustee of The Asia Foundation (TAF). Learn more about him here.