Yes, the worsening situation in Syria and the terrible rise of ISIS was the most dominant trend, but ask the faculty at the Frederick S. Pardee School of Global Studies at Boston University and you will find much detail, important nuance, and some surprises. 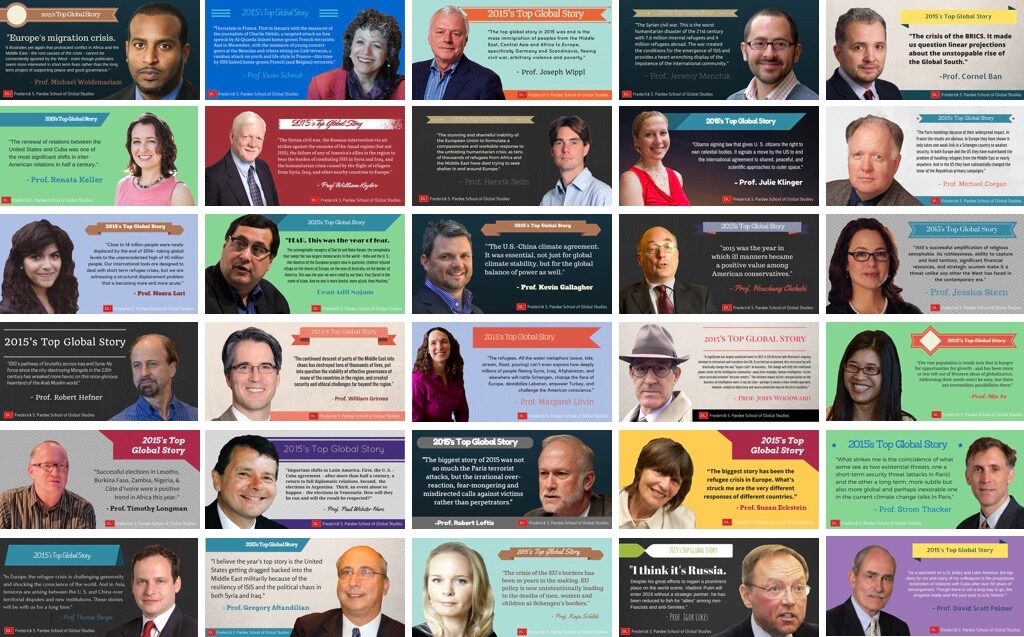 All through the month of December we asked Professors at the Pardee School what they thought were the most important global news stories or events of 2015. We have been posting their views on our Twitter feed (with the hashtag  #2015inReview).

This followed our survey of Pardee School faculty on the same question in 2014. Many of the trends that our colleagues had identified at the end of 2014 became more pronounced in 2015. None more so that the refugee crisis in Syria and the brutality of rising violent extremism, especially with ISIS/ISIL. What Prof. Robert Hefner called “ISIS’s pathway of brutality across Iraq and Syria.”

Various aspects of the Syrian civil war, the refugee crisis, Middle East implications, and the European reaction to the refugee crisis were identified by a number of our faculty as the biggest global story of 2015, including by Professors Jeremy Menchik, William Keylor, Joseph Wippl, Noora Lori, William Grimes, Thomas Berger, Susan Eckstein, Gregory Aftandilian, Margaret Litvin, Henrik Selin, Michael Woldemariam, and Kaija Schilde. On a related theme, Professors Michael Corgan and Vivien Schmidt highlighted the impact of and reaction to the bombing in Paris. Professor Strom Thacker drew the link to Paris of the two greatest existential threats faced by humanity: global security and global climate change.

The sense of xenophobia and ‘fear-mongering’ that has been generated by these events was identified by Professors Jessica Stern and Robert Loftis, while Professor Houchang Chehabi pointed towards the same in US politics and described 2015 as “the year in which ill manners became a positive value.” Professor Adil Najam summed it up, saying, that “this was the year of fear.”

Other trends that shaped the year 2015 and are likely to shape 2016 were also mentioned. For example, Professor Igor Lukes mentioned Russia, Professor Cornel Ban highlighted the crisis of the BRICS, Professor John Woodward identified changes in the CIA, and Professor Kevin Gallagher reminded us of the enormity of the US-China climate agreement. Professor Julie Klinger identified the US decision to give its citizens the right to own celestial bodies as a news of ‘universal’ import.

There were positive notes in our list too. One was Professor Timothy Longman’s identification of successful elections across Africa. Another was improved US-Cuba relations, which was highlighted by Professors Renata Keller, David Scott Palmer and Paul Hare. Professor Min Ye highlighted the opportunity for growth in South Asia that became even more apparent in 2015.

Pardee School Professors will be following, commenting on, writing about, and researching these global events as diligently as they did this year. Follow us on Twitter @BUPardeeSchool to keep pace with their accomplishments.

Meanwhile, on behalf of all our faculty, we wish the world a happy, a prosperous, and peaceful new year.